Christmas is to bloggers, what tax season is to accountants.

Except with whimsy, and extravagance, and the need to not do anything anyone else is doing, and with the requirement to have 57,000 ideas that people will want to make and pin and share.

Ideas that will make people envy your home, your creativity, and your general existence on this planet… An existence that has somehow allotted you the free time to create your remarkable home, with your extraordinary creativity, with ease and joy and merriment and not wanting to stab yourself. 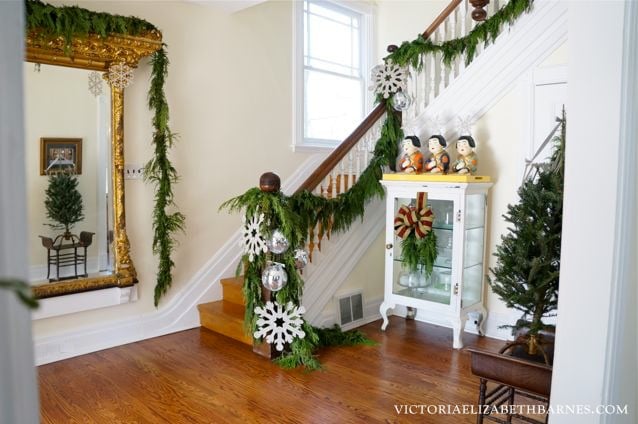 I would have liked to opt-out of that. But I got invited to participate in a holiday-home blog-tour and it made me look around and realize other bloggers are winning Christmas.

And because I am petty and childish, I find that unacceptable.
If there is a competition, I must be the winner.

Especially if that competition is empty and meaningless.

So I snorted some glitter and ordered a truckload of garland. When I filled out the order form, it said – choose your ship date. I typed– yesterday. 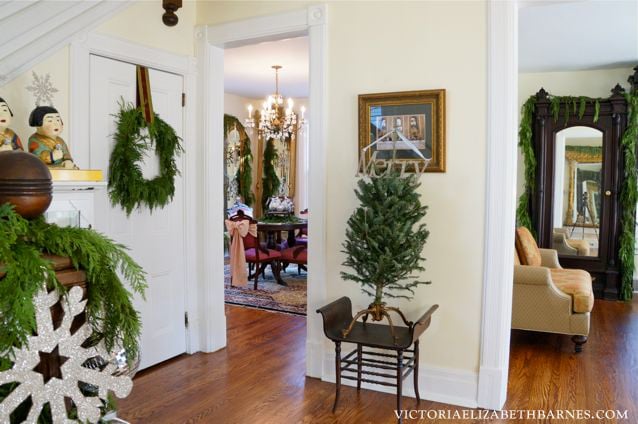 The Christmas house tour also clued me in to the secret of REALLY good-looking greenery: you need MORE.  I cannot explain why I needed this demonstrated to me, rather than knowing it intuitively… But I am compensating for my past mistakes.

When Paul came home, he said – how was your day?

I said – yes. It will be an EXPLOSION of Evergreen. A lush, wintry forest of magic and Wonderland and sap all over everything.

Paul said – you found someone to MAIL you 200 feet of evergreen garland?
I said – yes! That is the beauty of the internet. YOU CAN HAVE EVERYTHING DELIVERED.

Paul said – do you even know how long 200 feet is? That is MORE than twice the length of our house.

I said – yes. I wanted to be sure I had ENOUGH. And if there is any left over, I will craft it into mini wreaths! Wreaths for windows!  Wreaths for doors!

Then I told him –I also ordered a POUND of German glass glitter.
(Which you will be seeing twelve posts about shortly.)

And I bought four yards of taffeta.
WHICH I WILL SEW INTO GLORIOUS BOWS.

Then I smiled, all crazy-eyed and whispered in my just-escaped-from-the-lunatic-asylum-voice:
IT IS GOING TO BE A HOLIDAY EXTRAVAGANZA.

Paul said – right. It sounds like a nervous breakdown extravaganza to me. 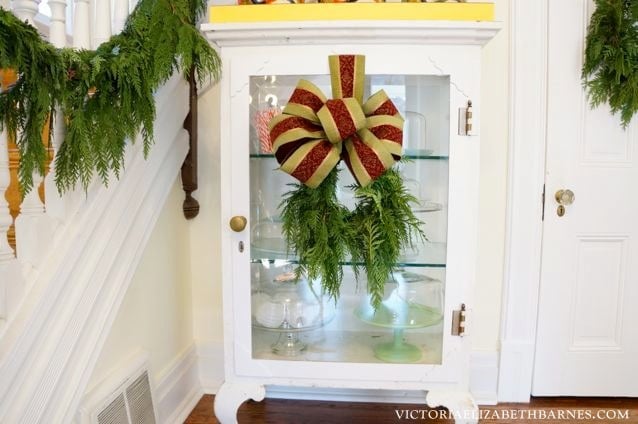 So if you got this far, and are actually reading, not just looking at the pictures… I consider you my friend. And therefore will invite you to watch me make a bow on a Google+ hangout.

It is for a site called Hometalk. They are fairly new, kind of a cross between the social aspects of a chatboard and the practical aspects of Pinterest.  They are doing a video about holiday decorating ideas and they asked me to do a demonstration of my post about how to make a bow.

And I have learned something already: when invited to do a video –  IMMEDIATELY ASK IF YOU CAN GO FIRST.

Someone beat me to that, so I am second. And I am hoping the first demonstration goes wildly awry so that in comparison I look extra competent.

It would be great if she could accidentally light something on fire.

Update: here is the video. I am at 10:00. I talk too much and do not even realize that Elvis is cleaning herself inappropriately. Also, I refer to Paul as long-suffering. What I MEANT to say was– he is extremely lucky.

I was actually reluctant to invite you to watch me make a bow and I considered not mentioning it at all, but I am pretty sure that is not the correct way to promote myself.

I am someone who requires a lot of editing, and I am far, far, far better on paper than in person… It is certain that I will say something idiotic. Or catapult myself into the Christmas tree.

My biggest concern is the likelihood that I cannot make a bow and talk at the same time. (Not to mention how I do not even understand how to use Google+ and I need to get on that before 2 o’clock this afternoon.)

It also seems possible that my bow-making skills will fail me and I will be revealed as a fraud.

If this sounds interesting to you, here is the Google event page. You do not need to have a Google account or anything… Just show up today at 2 o’clock.

It is exactly like watching a video on YouTube. Except, it is live. So if I make up a spur-of-the-moment song about bows, there will be no erasing it from eternity on the internet.

see all my holiday decorating ideas