Ripping out my soul for your entertainment… examining my first year of blogging.

Before my Craigslist–mirror went viral, I’d decided that it was sheer foolishness to have ever thought I would make a dent in the internet.

In fact, if I had any sense at all, I would have quit blogging around six months.

Six months is what separates the sensible people— who go back to their lives.
From the total lunatics— who decide to double down.

Somewhere here, I more than doubled down.

I pushed all my chips in.
I borrowed money from the mob.
I started snorting cocaine in the high-roller suites and set fire to the drapes.

Somewhere here I stopped feeling like a writer.
Or a doer of house projects.
Or a researcher of toilets.

I turned into a version of myself that I had never met– someone who would do WHATEVER IT TAKES. To get people to read my blog.

The word that comes to mind is hustler. 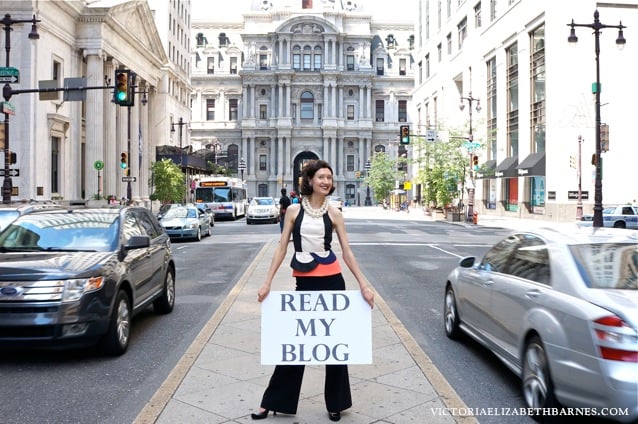 For me, at six months, a very tiny dictator woke up in my head.
She was mean. And wore all grey.
And she looked just like me.

She said:  vee must take over zee vurld.
And I agreed.

I thought if I could make it to one year—the parade would begin.

And I believed in my own infallibility— also defined as psychotic self-delusion.

Any megalomaniacal dictator can tell you that the first few months of a war are the best—there are impassioned speeches… the troops are excited… you haven’t run out of food and had to eat the horses.

But sometime between six months and a year is when you get an inkling that perhaps it’s not a matter of simply controlling the world with your mind.

This inkling grows in size and scope… until sometime around month eight, when you have a mini-breakdown.

But no one cares about your breakdown.

No one cares that you are having a crisis of the soul.

They don’t care, because blogging is synonymous with 24-year-old fashionistas in neon sunglasses, so attempting to convey to people the IMPORTANCE of your blog makes you sound like a total moron.

It also doesn’t help that much of what you say is rant-like: about how no one has shown up, and how this is UNACCEPTABLE.

And for the record, if there is anything less sympathetic to people than a 36-year-old woman crying about her blog, I do not know what it is.

In fact, if you want to confirm all of people’s worst suspicions about you? This is the way to do it.

And then– if somehow your blog makes it to one year?  Instead of the parade you anticipated, you get the gift of FINALLY grasping the idiocy of your undertaking.

You finally understand that there are roughly one billion other blogs.  And that the chances of yours being special is so microscopic as to be nonexistent.

So now you have two choices:
1. You can accept defeat and go spend time with your family.
2. You can commit yourself to self-delusion.

Lucky for me, I’ve been training in self-delusion all my life.
It is my second-greatest talent.

That endless enthusiasm is what makes people think I am fun. Unless they have to spend too much time with me, in which case it can be wearing… Because when I am excited about something? LOOK OUT.

I am going overboard.

I am going to fling myself off the side of the ship with no life vest or scuba gear or shark-repellant.

And you’re going to have to call in a Marine search-and-rescue team to find me in the ocean.  (If you’re the one calling, please make sure they only send young Marines… Let’s say under 32, shall we?)

Somewhere in the last year, ALL my enthusiasm BECAME this blog…  They merged into one entity—indistinguishable from each other.

I stopped caring about anything else. My only interest became pushing this blog forward… Uphill in a tornado… in an ice storm… carrying it over mountains while being pecked by vultures.

To do WHATEVER it takes.
Anything.

If human sacrifice were required, it would take me no time at all to build the altar.

For the love of ALL THAT IS HOLY… won’t you please share me with your friends?

An update of vital unimportance. I am going nowhere but up… But first I need to lie here on the floor for a while.