This is a departure from anything remotely house, garden, or craigslist-related.

I’m sorry if this disappoints you.
But:

This transition from grotesque-trend-that-should-be-banned, to mysterious-overnight-need-for-exact-repulsive-trend-purchase has not yet clad me in skinny jeans or peplum, and I am thankful for that. 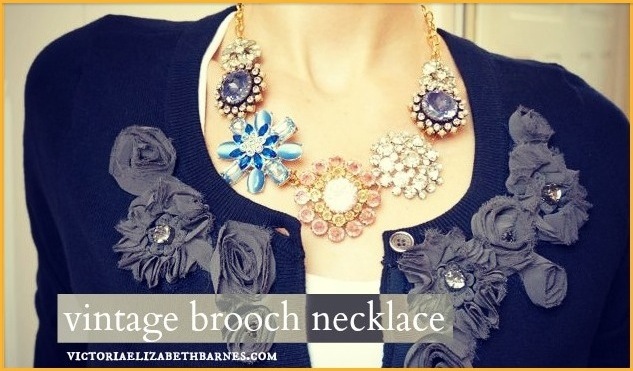 So.  We’ve established that I love anything giant, odd, fancy, and generally too large to fit in my house–an aesthetic that used to apply to my fashion sense too.

But in the last five years, my vanity has been eroded by my laziness.

This decline in giving-a-shit-about-how-I-look is a huge timesaver, but also accompanied by the sad consequence of technically not needing to buy fancy outfits.

But once in a while I see something.
And my raccoon brain is like—I MUST HAVE THAT.

If you too suffer from Raccoon-In-Head syndrome, you are familiar with this.

It was a ridiculous price.  But I COULD NOT leave without it.
Plus, it was embarrassing to try to hug it through the glass.
So I bought it.

If I told you how much it was, you would think I was insane.  But as of this post, it’s sold out so let’s pretend it was a normal price.

By the time I was halfway home, I realized that I could make my own version with the box of vintage pins I hoard uselessly… who wears pins?  No one.  So after I bought this chain, I had everything I needed to make my own, way-less-awesome necklace. 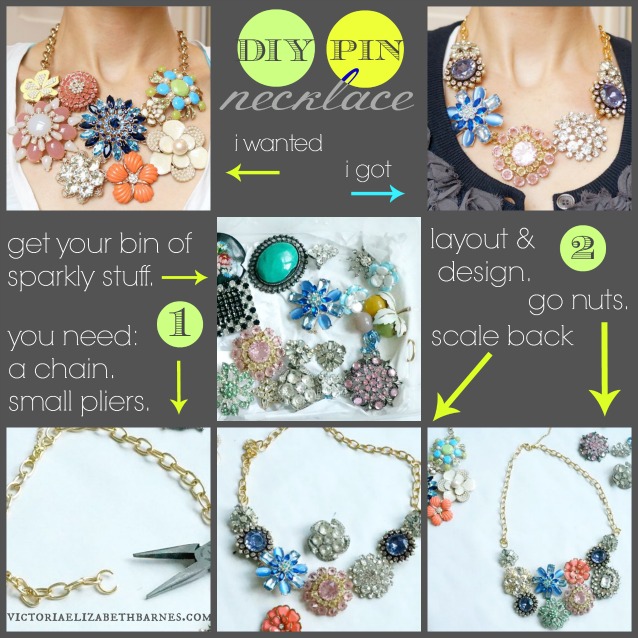 I’d like to say that I’m returning the one I bought… but the raccoon is still licking it.  Plus, lets be serious— it’s called an impulse purchase, because your impulse is to keep it.

Also, in this case it was called– overwhelmed/trying to buy 5 seconds of stress-relief/Versailles was not for sale.

I had SUCH a crap day last week, that I felt close to the brink.
The brink of what?  I don’t know.  Whatever that is when you feel overwhelmed and close to crying hysterically/tearing your hair out.

But ALSO LIKE YOU ARE ON FIRE WITH RAGE.

And the necklace was some knee-jerk reaction to just BUY five seconds of OTHERNESS.
To just think about something else.

Even though I could go LOOK IN MY CLOSET at all the otherness I’ve ALREADY purchased.  And be reminded that it’s only a brief respite…

Although, if you’re going to be on fire with rage, I guess you might as well be wearing a really nice necklace.

Also, I need to tell you how there was a time when I thought this blog was going to garner me a nice side-paycheck AND free swag.

Which?  Hello?  WHO IS STEALING MY SWAG?

But now I feel differently.  I feel this is a revolution.
A redefining of militant—to include shiny things and abolish khaki and berets.

And where I envy the revolutionaries who came before social media… I doubt Karl Marx woke his husband in the middle of the night to tell him his greatest fear—that he would never get 100,000 “likes” on Facebook.

I was scammed on Craigslist. Quick update.