Here’s the Before-and-After of the bath renovation.
Here’s an index of all bathroom remodel posts

We have a large window IN our shower– not unusual in old houses. 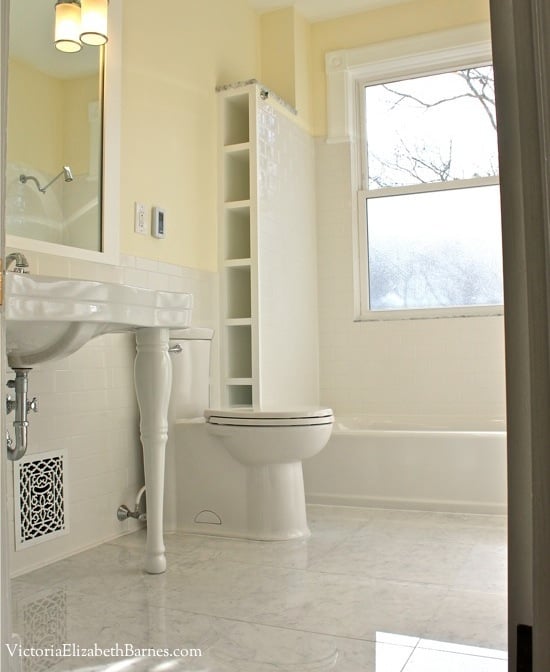 Below is the bathroom before we began the remodel… the layout was awesome.

You can see that our ever-creative, previous owner applied his signature-brand of totally-impractical-I-found-this-in-the-trash-and-couldn’t-pass-it-up-solution.

I will give him credit for ONE thing, though– he used a luxury ledge tub… The side of the tub that’s against the wall has a ledge 4″ wider than normal.

That doesn’t sound like much, but it really is… especially if you’re concerned with being too close to a shower window.

As we planned the new bathroom layout, (which involved gutting the room down to the studs, and moving the sink over to the same wall as the super-fancy concealed trapway toilet, we considered rearranging the shower location.

But the room is narrow, and we decided there was no good way to align the tub with another wall.

Here’s the window before.  It was the original one, and trimmed out in wood… Please don’t ask me about the sill.  I DON’T KNOW.

We also considered putting in a smaller window…  and moving it well above the shower area.

But in the end, I didn’t want to give up the natural light– I like the large window!

Also, I like my bathrooms to be BLINDINGLY bright… I’m really not kidding…  I would put floodlights in, if Paul didn’t stop me.

Plus?  By the time we began the bathroom remodel, I had decided that having a giant window in your shower is a total luxury.

What initially felt like a design-challenge is one of my favorite elements of this bathroom…  In the summer, it feels like an outdoor shower.

If you don’t have one?  I suggest you go hack a hole in the side of your house RIGHT NOW.

I should say that privacy is not an issue for us, so I get this may not work for you, but either way, here is my not-very-technical summation of how we waterproofed the window in the shower.

I do not pretend to be an expert on any of this. At all.

Mostly I held things.  Or handed things…  Or provided valuable commentary that Paul could not have lived without.

I have so many good suggestions ALL THE TIME.

And?  Guess who is the grout-inspector.
That is correct.  I was BORN FOR THIS JOB.

We ordered a window with vinyl interior trim, and pebbled privacy glass.

Theoretically the water wouldn’t hurt the window– it’s just vinyl and glass.  Plus the whole thing pops out for cleaning…

But Paul wanted to keep the water from hitting the window directly, so to make it REALLY classy— we cut a piece of plexiglas to cover just the bottom half of the window.

It’s held in place with four small dots of caulk. It’s actually great, because you can pull it out to clean it, it doesn’t block the light, and the window stays remarkably dry.

If you don’t have an old house, you may not understand that sometimes the ultimate solution is unconventional…

And, there is really no way to make plexiglas sound like anything other than how you might fix a window in your Appalachian shack… so I won’t try to convince you.

index of all bathroom remodel posts

LUCK on your side… a gift for my best friend. I’m like Liberace… but with more flair.