An update of vital unimportance.

If you emailed me or sent me kitchen ideas in the last two weeks, I was having a crisis.  And then the original crisis was totally eclipsed by a second… and now stuff has piled up to the point where everything is unmanageable.  I may never dig out.

I sort of wanted to explain the crisis, but decided I couldn’t face the extensive typing it would require.

That’s one of the many problems with having a crisis AND a blog: the blog requires that you write everything down, and edit it, and find accompanying images, and compress them, and upload them, and think of a catchy title, and hope people share it on Facebook…  and make sure your crisis is entertaining.

But the crisis makes you want to sit on the couch and watch Say Yes to the Dress. Which I’ve JUST discovered and am angry that no one told me about it before now.

It’s something that should fill me with scorn. But instead is so soothing that I want to watch it for hours until my brain melts out my ears.

A reader suggested in the comments last week that I look up the kitchen from Dynasty… and I didn’t even have to, because another reader found it for me (and hello?  THAT HOUSE!)

And speaking of comments, if you are not reading them?  You’re missing out on the best part.

Not only are you all far more entertaining than I am, you also seem a lot more organized and sensible.

You even have ways to make golf more interesting—pointing out that if played at 200 miles an hour, like Nascar… it would be riveting.

I’m planning to just turn the content over to you all, and dedicate my time to Craigslist and bridal-reality-television and looking at kitchen stuff I cannot remotely afford. 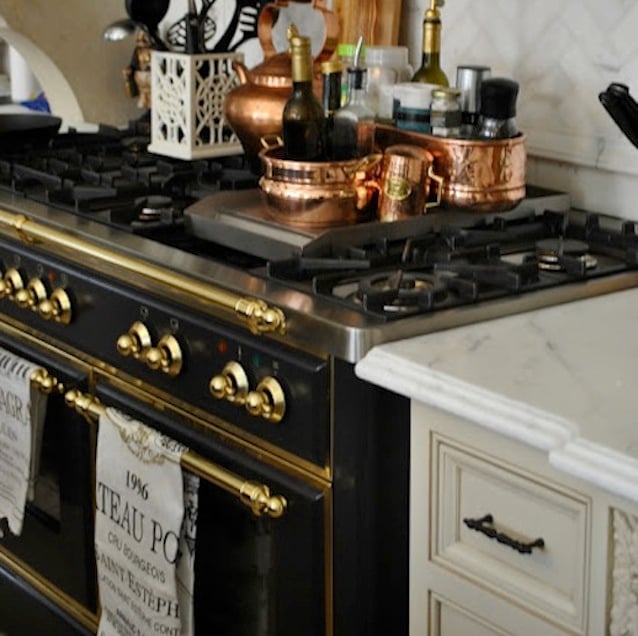 That is from The Enchanted Home’s house tour… Maybe everyone on the internet already knows about her, but until one of you evil people sent me the link, I didn’t…

I spent an hour going through her site and saying—what? What? WHAT IS THAT?
Her house confuses me. Like– I’m sorry? That’s your HOUSE?
I cannot even comprehend what that must be like.

It was sort of like finding out that aliens DO exist. And they have really nice stoves.

To her? A house is a place where everything is beautiful and perfect and finished and huge and the stove costs more than my car. And actually my car is really crappy, so that’s probably not even a good comparison.

To me, a house is where you live, and there is laundry on the floor, and sometimes the cat barfs and you are grateful if it’s on the hardwood and not the rug.

So.  Anyway.  This post lacks any coherent theme or purpose.  The crisis (and possibly reality TV) have made me dull. But also there is something pleasant about being able to hit publish on anything I want… Like I am rebelling against society’s expectations for topic-sentences and conclusion-paragraphs.

I do have a bunch of projects I want to share with you, but haven’t gotten around to photographing them.  (See crisis, et al.)

We finished the medical table (almost) and I am so excited to say that we are FINALLY finishing the garden urn… it’s been a full year since we got it, and it took me this long to decide that it really did need to be overhauled.

We had it sandblasted because there was SO MUCH paint and rust that it was really the only way we’d get a totally clean surface.  It’s ready to be picked up, so tonight or tomorrow we’ll see what we’re working with.  I’ll post a photo on Facebook when we get it.

AND most exciting is that after three years of pestering– Paul has agreed to build me a glass-front bookcase in a small nook on the third floor.

I would show you a photo of the space, but I should really clean up first—so as to not actually verify any resemblance to the above photo.

Kitchen inspiration- vintage industrial design. Ripping out my soul for your entertainment… examining my first year of blogging.