Before I write about the kitchen, I am compelled to explain something off-topic… if you are only here for the kitchen, scroll a bit.

So.
On my post about the sconces, people wondered— how is it REMOTELY possible that Paul would need to convince you to go into that shop!? (Or any shop, for that matter?) 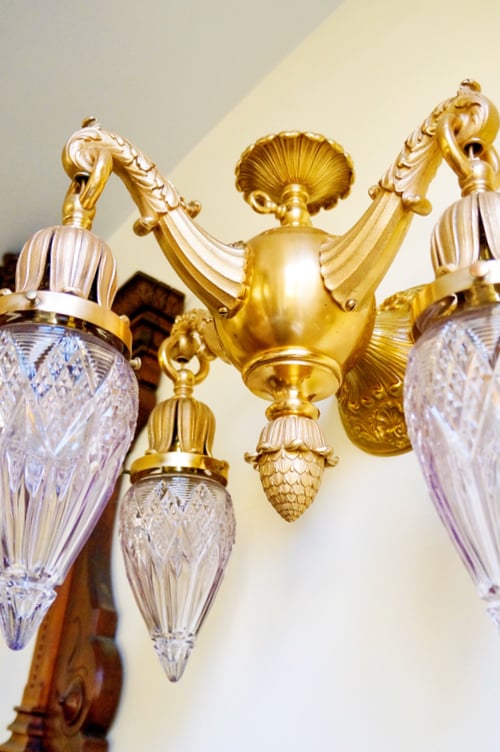 This is actually a question I had intended to answer.

I (inadvertently) brought home the PERFECT photo to explain… but as that sconce-post got longer and longer, I decided— this photo is unnecessary… on so many levels.

But it would’ve helped you understand— SOUTH STREET IS WEIRD. 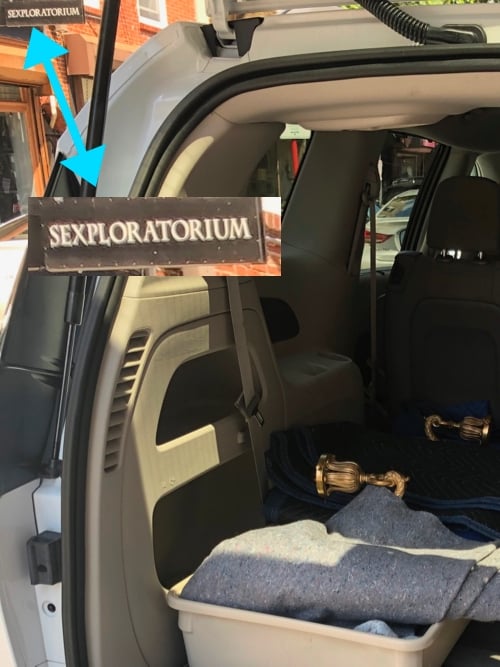 If I needed to purchase an outfit constructed entirely of latex, hold a séance, or buy horrific items for a bachelorette party… I would go directly to South Street.

*yes, the mall store of gag gifts that I assume must now be closed after being crushed under the psychic-weight of the collective-embarrassment of all humanity.

I apologize in advance now, for asking you to absorb this photo I just googled– to see if my memory was accurate, or if I hallucinated a building with GIANT ANTS plus whatever is happening with that dude’s head.

I am unsure why it is important for me to specify– the ANTS are not a paint-optical-illusion. They are ACTUAL 3d ant sculptures. 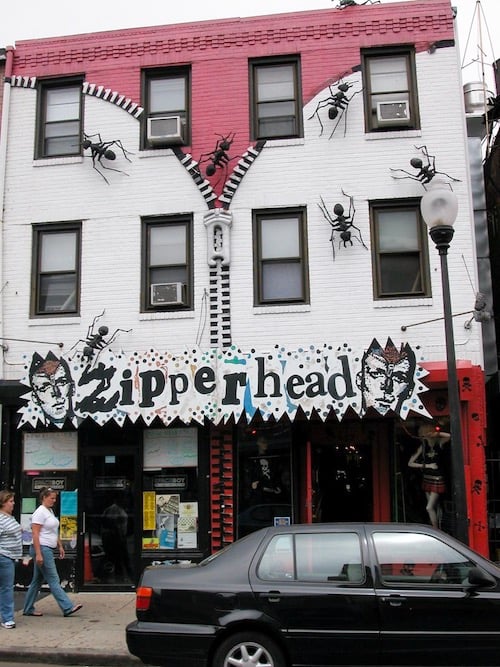 Basically what I am saying– I was not kidding about the gimp mask.

Also– the lamp guy has NO sign out front. NO NOTHING. It looks like the place has LONG been out of business. All of the cardboard and crap piled in the entryway… it does not LOOK like an ACTUAL shop. Let alone an antique place. Let alone OPEN.

Interestingly though, it turns out that the lamp shop actually IS occult black magic wizardry– I learned this when someone left me a comment that this shop has been closed for TWO YEARS.

And even though I KNOW FOR SURE that is impossible because I just bought the lamps, IN THIS, THE YEAR OF OUR LORD 2019… I still believe this comment. Because I realized– the thing this shop MOST feels like is a ghost-pirate treasure-ship.

I was like– OH! I see! Yes, that makes TOTAL SENSE. 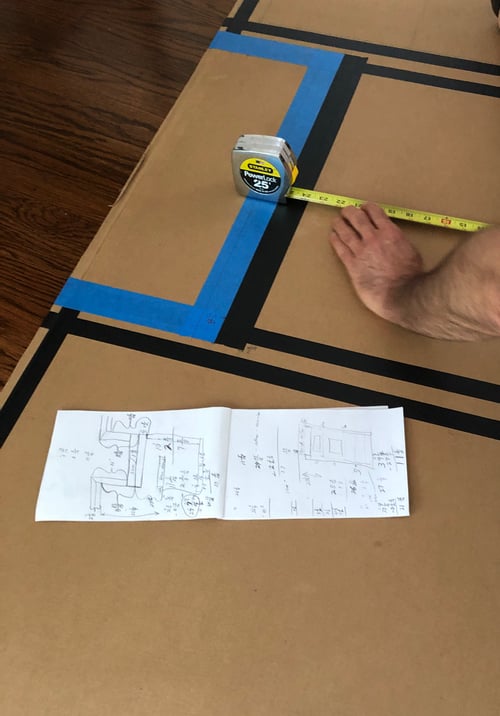 For the kitchen’s all-drawer base cabinets, Paul wants to do four, not three drawers… considering our stuff, he feels it is a better use of space.

He has been going around measuring/investigating our kitchen-items– stacks of plates, mason jars, all that… to figure out the best ratios; similar to when he built the piano drawers– we laid out how/where we wanted the tall/bulky kitchen items, and he designed around them.

I do really like how customizing the storage turned out, so I (THINK?) I am signing on to his theory for the other drawers… he is away for a minute, so I am mulling.

Anyone else do something similar? To be clear, we already have plenty of deep storage for giant pots, the food processor, etc.

We are going to make it even better by adding filtered INSTANT HOT WATER.
Truly, this is the thing I am most excited about!!

I drink an INSANE AMOUNT of tea in winter.

A— I like tea.
B— I am married to a human who believes central heating is for those who lack the appropriate moral compass and also fail to value vigorous, early-morning marching.

It may surprise you to learn– despite all appearances to the contrary, I do actually try to accommodate the core principles of his being.

Plus, my mug is truly enormous, (the MOST GARGANTUAN I could find); so that amount of water takes more than five seconds to boil, which is obviously torture and unacceptable.

Aside:
I have long purchased bulk bags of loose Peppermint tea leaves… but after reading How Not To Die, which I strongly endorse– I was motivated to incorporate so many EASY nutrition-improvements; example: obviously we all know that green tea is GOOD for us, but I don’t really like it… but UNDERSTANDING has changed my habits– so I now also get a bag of Green Tea and add some in the morning, (green tea has some caffeine, unlike mint.)

I use the biggest strainer I could find (they do come smaller!) but my mug is REALLY REALLY SO SO BIG. 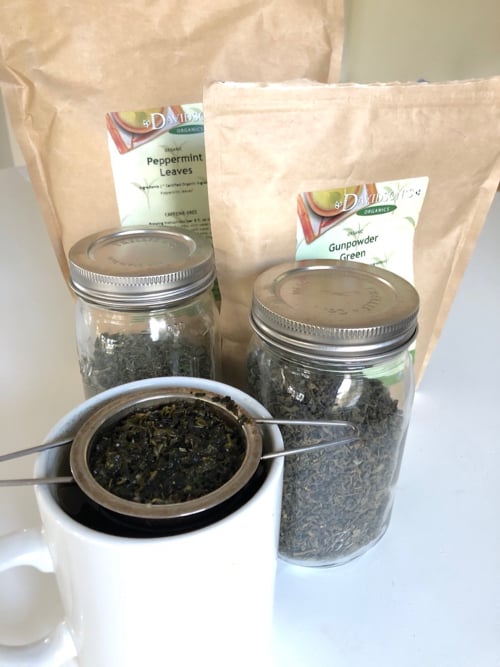 However.
Finding a dispenser for these two different water options— exercise in frustration.

All the other kitchen hardware will be unlacquered brass— the drawer pulls, fridge/freezer handle, piano pulls… but they won’t be directly NEXT to the faucet the way the filtration dispenser will be.

3. last-but-not-least I wanted wall-mount… I really wanted to get EVERYTHING off the kitchen counter… to me, the backsplash is the logical location for ALL this stuff… so I spent an INSANE amount of time trying to find a wall mount dispenser– which apparently does not exist… WHY?

I explored trying to DIY what lives in my head, using appropriately-unlacquered materials… but as always, my ideas are superior to anything that actually exists… the idea I liked best was a cross-handle, short wall tap, (do one for each water line)… I still like this idea, ESPECIALLY if I could find a pair of antique taps that I loved… but Paul’s head was melting as I explained.

After going around and around… I got over it and am resigned to a countertop dispenser.

A post shared by Victoria Elizabeth Barnes (@victoriaelizabethbarnes) on Dec 10, 2019 at 9:26am PST

Photo above is this filtration faucet… I like it! BUT it’s $$$$$, and BIG– 10.25″… which brings me to my last consideration: size– if it cannot be a “match” I’d prefer small… no, I cannot get a matching faucet, already got the one I LOVE which is also the only one that works for our sink– explanation is here if you missed.

So I narrowed down to my smallest options, height-wise:

1. at 8″ tall, this Insinkerator is (I THINK) the smallest… I’ve looked at a LOT of specs, everything else is between 9-11″ tall… it’s stupidly expensive, and still have to purchase the hot tank… it does not come in unlacquered, so I would choose chrome or polished nickel?

2. I like this Newport Brass style better than the Insinkerator, it’s similar to above photo, but not as small as Insinkerator, it is less $$$,  BUT it is more “look at me” and maybe there is value in LESS-noticeable… but consider this: I can special-order this one in UNLACQUERED BRASS… although to repeat from above, I’m uncertain two different brands will complement each other.

Note: I eliminated anything unbranded/made in China because even though a cheap one on eBay looks good, I’d be concerned about lead or something… Paul and I watched the first episode of the netflix series “broken” and it did NOT inspire confidence!

1. Which style dispenser do you like better?
2. What finish would you choose?