Craigslist is my spirit animal – The bed saga, Pt. 1

The bedrooms at our old house were about the size of shoeboxes, but at this house we have plenty of room for a king-size bed.
However.

The bed-shopping experience has been derailed by my ever-escalating symptoms of GFTD: Giant Fancy Thing Disease.

Giant Fancy Things are out there.
I will be getting them.

My affliction is particularly advanced – to the point where practicality has stopped playing any role at all in my design choices.

Do you see a problem here? No? Me either. 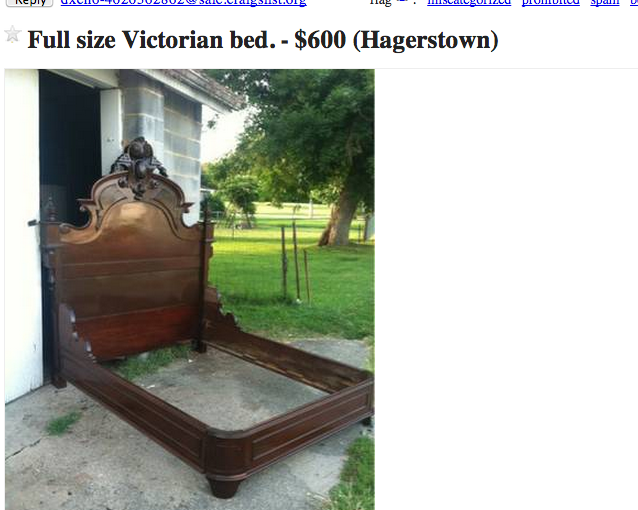 For three whole months I succeeded in thinking about this bed every day.

Aside from the minor issue of being the wrong size, it was originally listed at $1,000. Plus it was far… 2.5 hours worth of far. I do not even know how it ended up in my search results because I don’t look outside the Philadelphia area. If I did, I would spend all my time doing NOTHING but driving around like a mad woman.

Not to mention how I would bankrupt us in 5 days.
Gleefully.

But it turns out that the primordial mirror troll has a sister – the bed troll.
Every few days she would whisper – get me that bed. It is mine. I need to love it.

I kept telling her – please, be serious. We need bigger, not smaller.
But she would just shrug and say – what does that have to do with anything? It is giant. It is fancy. Why not get it?

So I emailed the guy… and just like all my other Craigslist finds, there was:
1 – surprisingly good news.
2 – an insurmountable problem that I decided to ignore. 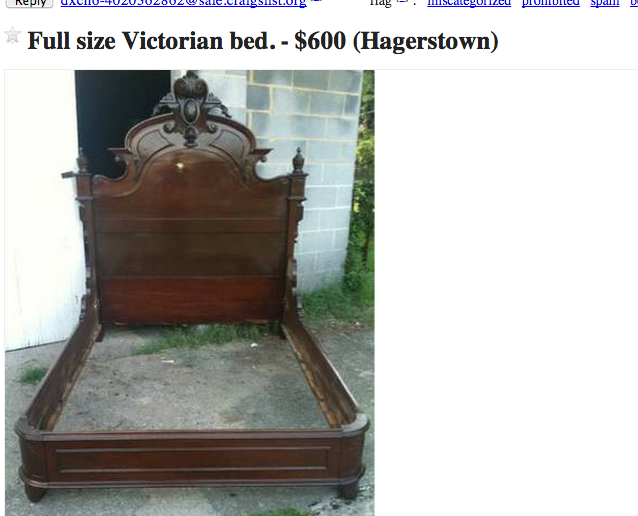 The good news:
-The bed is actually wide enough. Sort of. Depending on your definition of “enough.”
-He would take $300 if we came THAT day.

The bad news:
-The bed is not quite long enough.

You can decide for yourself whether this is important or not; personally, I decided it wasn’t and the next step was to tell Paul the good news.

After 9 years of marriage, I have learned that Paul and I explain our ideas very differently; I like to use an evangelical fervor to get right to the heart of the matter.

I focus on communicating the pure awesomeness of the possibility… And in contrast, sometimes Paul’s response of excessive questioning and detail-seeking makes me feel like he is not appreciating the idea.

So when possible, I will draw him a diagram. That way when he starts with the questions, I can just point and say– your concerns are addressed here, in section 34.B – and I am less likely to destroy my own campaign by shouting: NOT RELEVANT! NEXT QUESTION! 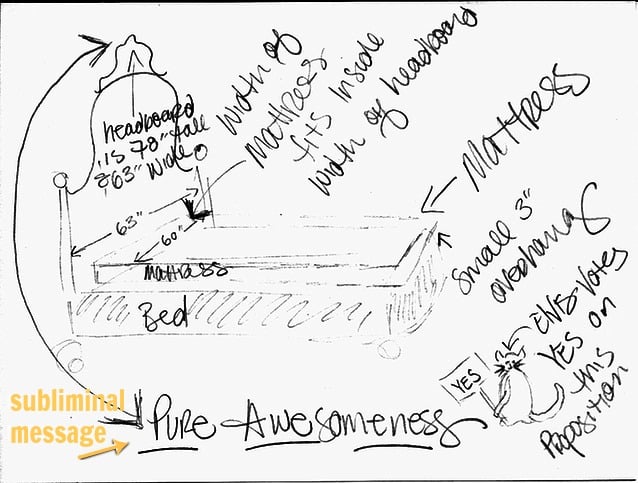 Paul said – I thought we were getting a king-size bed? I nodded and said – believe me. So did I. But apparently, we are getting this bed.
Then I broke out my diagram.

He looked at it for a minute and then said – you have the mattress being longer than the bed?
I said – yes.

Paul said – so… the mattress will just… hang over?
I said – yes.

Paul said – I do not think that will look good.
I said – it will.

You notice my brief, unapologetic responses? This is my New Year’s resolution: explain nothing. I do not owe the world a justification for my genius.

Besides, who even cares if the mattress does not fit the bed exactly? We are the only ones who hang out in our bedroom… do we really need to be concerned that people might judge us for violating societal-norms regarding arbitrary and restrictive mattress-to-bed-length ratios?

But I caved pretty quickly because Paul did not seem convinced and I did not want him to think I had not thought this through… So I said – well. The other option is that we could cut the mattress. It is just memory foam. We could use the Sawzall. 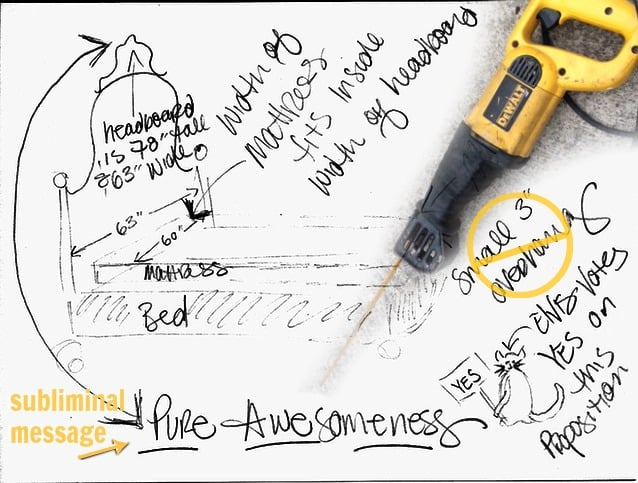 The bed troll shouted at me– I told you! I told you that was a good idea!!
But she does not know Paul like I do.
I said to him – what do you mean, interesting?

Paul said – you think part of getting a new bed is when you cut the mattress with power tools. That is interesting.

The bed troll whispered – don’t listen to him. You are an innovator. A freer of the mattress-oppressed… just ask your friends on the Internet.

I smiled at Paul, but I used my fake smile that means– later, when you cannot find your keys, I will pretend I have no idea where they are.

Then I pointed out – of course, obviously, it would be BETTER if the mattress fit the bed. But why would we allow something as mundane as a MATTRESS to prohibit us from sleeping in grandeur?

How is THAT logical? It’s not. It is actually beyond non-logic. Into the realm of idiotic.
Only a fool would not make the mattress fit the bed. 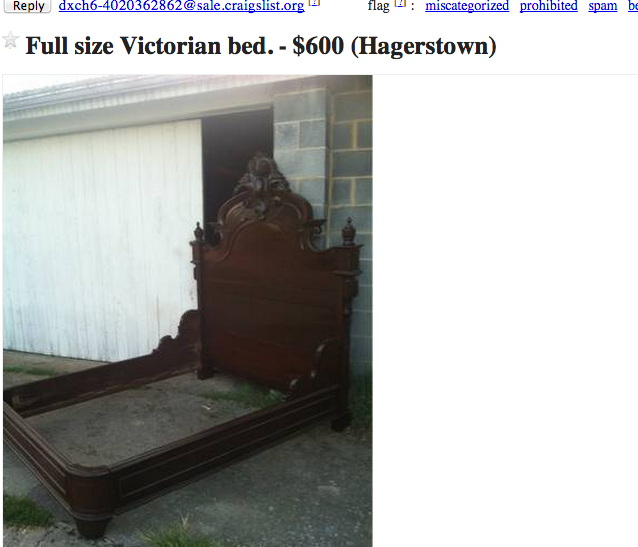 Paul said – maybe. Or maybe this is a case of already having it all. We have a bed, a mattress, they fit together… But out of curiosity, and not as an endorsement of this idea… How exactly do you imagine our mattress being paired with this bed?

So I pointed at the diagram and explained how I was thinking we could just lay a piece of plywood over the top of the base… Sort of like a platform bed.

I looked at the photos. And I could see how that was sort of low… but the bed troll whispered –don’t worry about that now. Now is just the time for getting it. Prioritize. Focus. Goals. 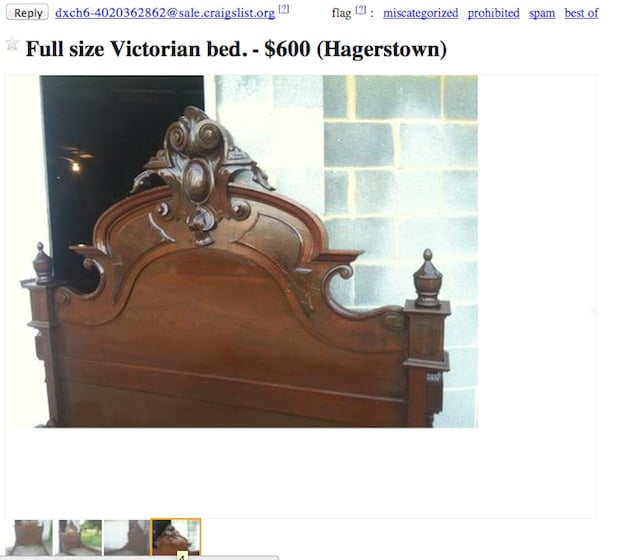 I looked around, confused how I ended up discussing matters of such unimportance, and I realized it was time to redirect – I had arrived at the time in a conversation with Paul where he has misappropriated the entire topic.

He is good at this. Very subtle. And I always follow him down that path, into the woods… answering his questions and talking about things that do not matter… until I look around and realize I have no idea where I am and it is getting dark and it is time to marshall us back into formation.

So I said– do you SEE the headboard? Why are we talking about anything else?

I mean, sure. It’s too bad the bed is not the right size and everything… But DO YOU SEE THE HEADBOARD? Throw up your hands! Join the tent revival!

Paul said – there will be no rejoicing if I cannot fit the headboard up the stairwell.

If necessary, I will rearrange the laws of space and time and molecular composition… One of my readers is a quantum physicist, and she said that will absolutely work.

And what did the bed troll say? Nothing… She was silent because she knows that once you have something IN the house, the war is won… All that’s left is to hammer out who controls France.

*** cliffhanger***
I am working on part two as fast as I can.
You will be surprised to learn that my space-time-continuum-rearrangement did not go as planned.

Update: here’s the bed, part two. And here’s part three: a VIDEO where we haul the bed up to the roof and THROUGH a window.

see all my favorite finds!

You know your project is out of control when… Craigslist bed saga, part two.