Paul was the one who saw the ad for a free antique display case on Craigslist… (He was looking to find another pool table, because I have more slate projects in mind.) 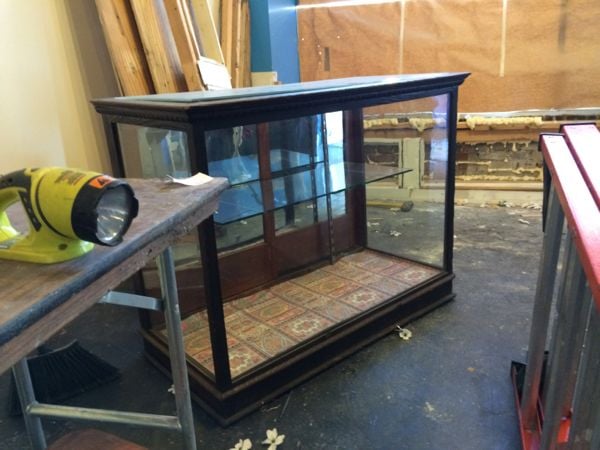 The guy getting rid of it was renovating a shop and needed it gone… and because I am a kind and generous person, I was able to help him with that!

I listed it on Craigslist as we drove home. It sold for $250. 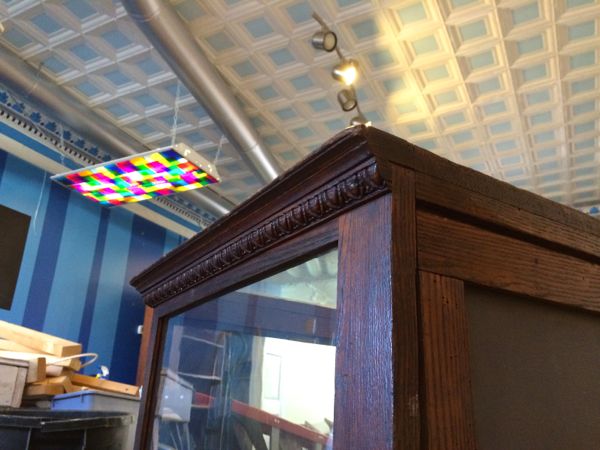 Was I was a little bit tempted to hang on to it? Yes… I really liked the egg and dart around the upper edge. And it did sort of seem like something I might find a spot for it in the kitchen – I mean, it kind of holds stuff.

But the storage really isn’t great if you actually want to use it rather than just display stuff you never touch.

The doors are on the back, so accessing the shelving is tricky, unless I made the doors the front… but then the fancy molding wouldn’t show. 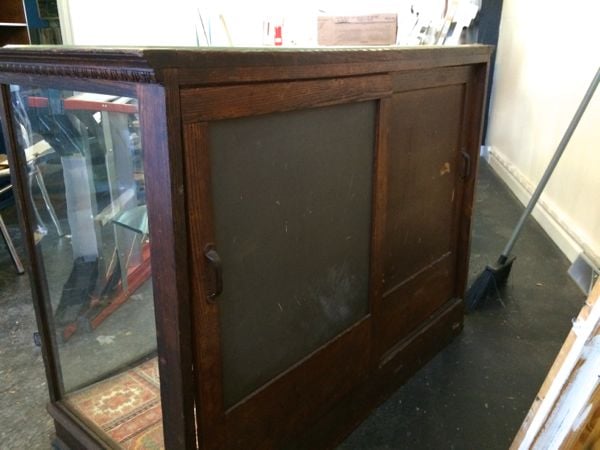 Anyway. These things show up all the time on Craigslist, so if at some point I decide I cannot live without one, I will be able to find similar.

I realize that these photos stink, but I took them to post it on Craigslist on the way home, and then sold it without remembering to take better pictures. You get the idea.

A saga that spans three hefty books— historical fiction, beginning in 1904 London, based around a wealthy, upperclass English family.

WWI, WWII, lots of characters, lots of subplots… None of the characters are deep or unpredictable, none of the historical/political events are explored in a way that will bring you enlightenment or intellectual stimulation… but the scope of her storytelling is impressive and fun; and she does a wonderful job of juggling it all, and moving along quickly.

She has an overblown writing style that for some reason I find extremely appealing rather than annoying. (Yes. Correct. I, VEB: writer of overblown hyperbole, dislike this in other writers.)

The women are beautiful, the men are honorable, (except the dastardly one!)… it’s melodramatic, sweeping, glamorous, and filled with improbable situations like riding a bike through London while being bombed by the Nazis while also wearing Schiaparelli.

I think this is my third time through the whole series, and I’m to the third book… her storytelling does not flag; the third book still goes strong with new stories for the old characters.

This is an old BBC show, (first aired in the UK  and was later broadcast in the United States on PBS)… It’s essentially a reality show of Downton Abbey – it uses real people who volunteered to re-create an Edwardian household for a month.

Paul bailed after the first few episodes because he found the family experiencing the “upstairs” lifestyle to be UNBEARABLE.

Especially “Lord”… he is so self-satisfied and smugly un-selfaware. Personally, I enjoyed hating him. And I suspect that BBC was delighted to have inadvertently found someone so willing to publicly display his asshat-ish-ness.

I actually liked “Lady.” Although I wondered how she could tolerate her husband.

Anyway. The show is somewhat dated, but if you like this sort of topic, I think you’ll enjoy it!

A theme-restaurant in Houston has been “home” to four white Bengal tigers since 2005… These tigers are held indoors at all times.

According to ANYONE WITH A BRAIN, a theme restaurant is not an acceptable habitat for tigers.

WHAT WE CAN DO:

For the last 12 years, Landry’s has deprived four #tigers of any access to sunlight, fresh air, or natural surfaces. https://t.co/1oTD8eNJiM 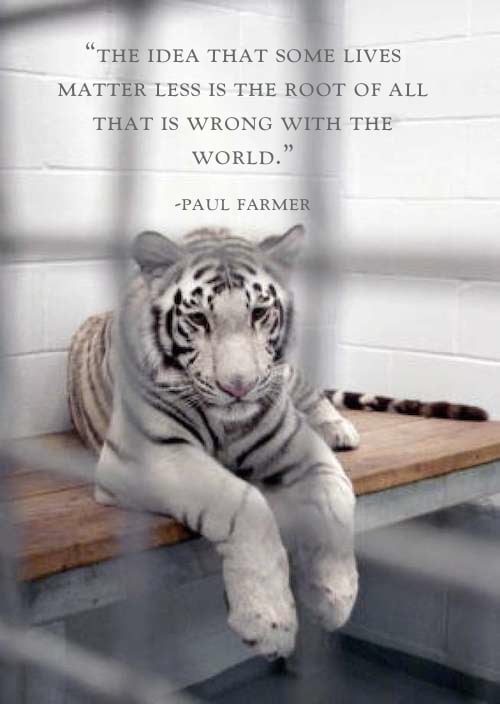 How can we help humans see these tigers NOT as an “attraction” but as an abomination to our fellow earthlings… these beings who share our beautiful planet and also call it home?

It’s not just these tigers… it’s circuses and roadside zoos, and the myriad ways that humans see other species as disposable: from dogfighting. To “the crush” which is how baby elephants are “trained” (that’s a Nat Geo link, and there are NO images, graphic or otherwise) so that we can use them as wildlife tourism.

From roasting, boiling, and skinning dogs alive at Yulin dogmeat festival. To the way the dairy industry IS the veal industry. To the egg industry’s practice of tossing male chicks into a grinder WHILE ALIVE (they have no use for boy babies in the egg-laying industry).

These all exist on the same spectrum: the assumption that non-human animal’s pain, fear, suffering, loneliness, hopelessness… is what? Inconsequential?

How are we able to turn off the natural empathy that we have for all living beings? How does this change our fundamental existence on earth?

Celebrate Easter WITHOUT eggs! Choose compassion! Speak for those who cannot speak for themselves… PROVERBS 31:8 Baby boy chicks are ground up while they are still alive, feeling, breathing… Egg-production facilities purchase their stock (i.e., baby chicks) from an egg hatchery… male chicks born at an egg-hatchery have no value and are sent to a chipper where they are ground up alive… (Doesn’t matter if they are free-range) 150,000 male chicks hatch every 24 hours at at ONE large egg-hatchery. Grabbed by their fragile wings by workers known as “sexers,” who separate males from females, these baby animals go into a grinding machine – tossed around by a spinning auger before being torn to pieces by a high-pressure macerator. at ONE large facility, over 30 MILLION male chicks are chipped up per year. GOOGLE: “chick culling” to read more

A photo posted by Victoria Elizabeth Barnes (@victoriaelizabethbarnes) on Mar 23, 2016 at 5:12pm PDT

We cannot distance ourselves from their suffering. WE, the people who SEE IT. We must be the ones to say loudly: THIS IS WRONG.

Every act of cruelty towards any creature is contrary to human dignity… We are not God. We must forcefully reject the notion that our being created in God’s image and given dominion over the Earth justifies absolute domination over other creatures — Pope Francis, second encyclical

Well! THAT was awesomely full of holiday cheer! I’m sure you really enjoyed it!

If you read all this way… xoxo times 10,000. Please enjoy this video of baby monkey pumpkin playing fetch with his stuffed hedgehog.

I did not “train” him to do this. The hedgehog fell off the bed one day and he brought it back, and apparently he really likes this game!

Mini barrister bookcase (and a foster kitten update.) DIY upholstery: for people who love being irritated.