How to grow cuttings: pinching and rooting.

Did you know that some plants can be propagated by rooting a piece of the cut plant in soil? AND that taking those cuttings is the key to getting bushier plants, with more blooms… it’s called “pinching.”

First, a quick refresher in basic botany and then step-by-step instructions!

Theoretically, you don’t need to start this in the house.  But if you do, I can nearly guarantee you a 100% germination rate… not to mention you get a head-start with the size of the plants. (I can also guarantee that having a temporary greenhouse in your kitchen is really annoying.)

I use a soil-blocking tool, to make soil bricks for my seed-starting container.

If you aren’t familiar with this method, here’s a post on how to make soil bricks… I wrote out all the steps along with some other tips and advice; below is the video that accompanies that post.

Note: I don’t make my own mix.  I get a huge brick of ProMix  at my farm supply store.

Your seedlings will not grow on hope.

Depending on the temperature and the quality of your seed… you should see sprouts within a few days. Disclaimer:  if you buy seeds (or anything) from a place that also sells tires and milk, don’t be surprised if they don’t perform the way you want.  This goes quadruple for dahlia tubers.

I use this heat mat (it’s bigger than most) for the zinnia seedlings… which isn’t necessary, but if the seeds are in a really cool place, you might want to consider it.   Zinnia loves warmth.  The heat mat speeds up germination, and also growth, which gets me to the pinching part faster…

New plant material grows from the spot where the leaf joins the stem.

The first leaves that appear on a plant, are not actually leaves.  They’re called cotyledon… They are the predecessors to the first true leaves.  Eventually they may turn yellow or brown and fall off.  This is totally fine and does not mean the plant is dying.

Although frankly, whoever wrote the rules of botany never grew zinnia, since I’ve seen them sprout from the cotyledon lots of times…  but to be safe, especially with other plants, play by the rules… 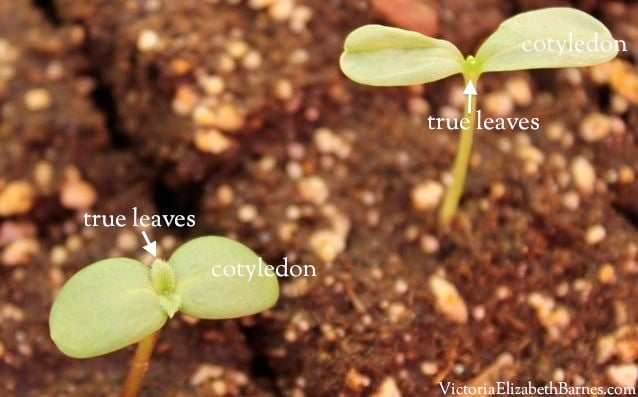 Pinching applies to lots of plants, flowers, and herbs… But not all of them.  If you’re not sure, google it.

Once you have your first true leaves, what emerges over top of that is what we take off.

Removing the primary bud releases the axillary buds…  Meaning you force the plant to sprout two branches instead of one, giving you a fuller plant. Do you have to do this?  No.  Not at all.  But I don’t know why you’d want a skinny plant rather than a bushy plant…

What comes next determines a couple of things, so we’ll come back to this step in a minute.

I let this seedling get bigger than I normally would before pinching, so it would make a clear demonstration… you don’t need this much stem. 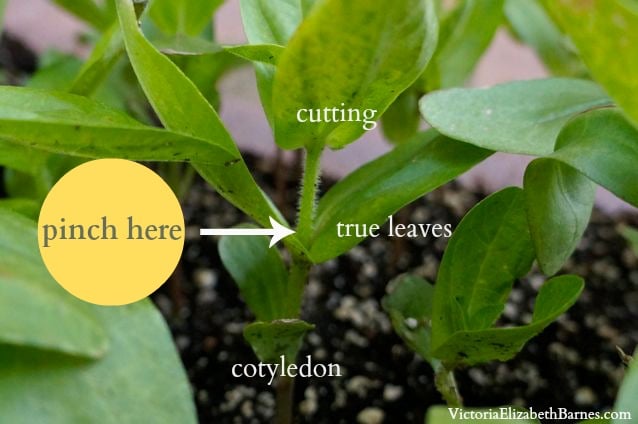 The part you cut off the plant is called a cutting.  And it will root itself and give you a WHOLE NEW PLANT.

If you don’t want the effort, no problem!  Toss it… you are DONE!

If you have OCD like me, and would never consider NOT getting more plants… read on.

If you’re doing this later in the season, you can stick them right in the dirt where you want them and keep them watered, and they’ll grow right there… Last year, I had a full-size zinnia fall over, and I just cut it up, stuck it in the ground, made sure I watered well for a week… and had five more plants.

If it’s still cool outside— you’ll need to bring them inside… the cuttings need warmth to grow roots.

Some people will use rooting hormone… I don’t.

So now is where we go back to step four—pinching. Pinching means literally using your thumbnail and index finger to pinch off the top part of the plant. But if you want to use it as a cutting, you don’t want to squish the stem, so you need to cut it with a razor or knife.

And, if you want to take cuttings, you’re going to need to let the seedling get big enough to have a viable cutting.

If you don’t want to take cuttings, and you only want to pinch the plant to make it fuller, you can pinch off the plant over the first true leaves as soon as possible, so that no extra energy goes into producing plant material you’re just going to cut off. 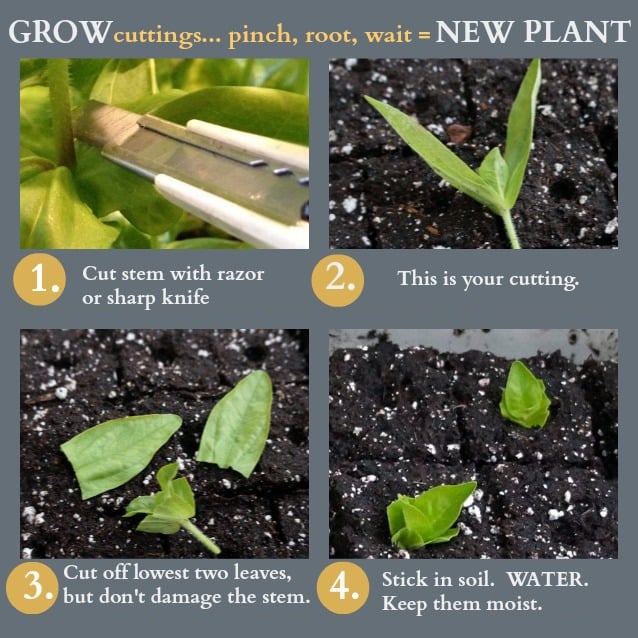 Your cuttings will take about two weeks to establish new roots.  It may look REALLY CRAPPY in the meanwhile.

Keep it watered… don’t let it dry out, since at first it doesn’t have any roots at all!!

When it gets big enough, you’ll want to pinch it… by that time I’m usually maxed out on this process, but you could keep going with that cutting if you wanted.

Don’t forget to slowly expose your new seedlings to the elements.  A partly shady spot, with gradually more sun over a few days will acclimate them without shocking them.

If you have a place in your driveway, and your husband comes home after dark, that may not be the right spot. 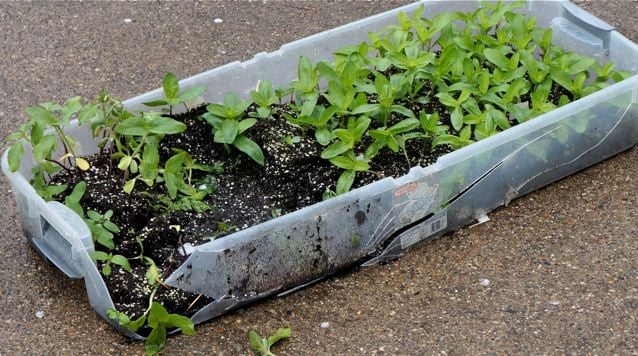 Think about some kind of support system… If you’re just planting one row, I don’t think you’ll have a problem, but if you’re growing a deep bed of them, you’ll want something in place.

Last year I didn’t stake, and by the end of August, I wished I had… a few fell over and it caused mass chaos with everything wanting to join the revolt.

I can’t say for sure yet what my best recommendation is, but I’m planning to try tomato cages every three plants…

This is the first generation seedling… the original plant grown from seed. 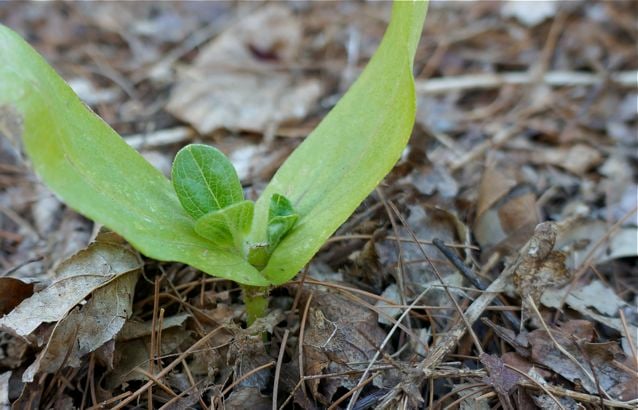 My favorite flowers for a cutting garden. LUCK on your side… a gift for my best friend.