The acquisition troll is on her hamster wheel… churning away, wearing an 80’s style sweatband and leg warmers.

She was the one who suggested I go back, alone– the day after the auction previews, to two, separate auctions… and drive back and forth between the two in order to bid on items of questionable value… then run glassy-eyed to my car and drive back to the other auction while psychically-willing them to not have begun bidding on my next thing.

Paul thought that doing this once would cure me forever. But I guess he does not know me at all.

There were three. Or four. Or five. Or fifty-seven things I wanted to bid on. But the problem with auctions is that they can only give you an estimate of when the item will sell, and depending on any number of factors, you could be waiting a while.

Then, if you take two separate auction houses, each running multiple auctions, all with totally unpredictable and variable timetables… You really have yourself a party.

And my favorite type of party is where you are avoiding doing one thing, while thinking about another, while a separate segment of your brain is juggling flaming knives and encouraging you to run around in circles and then drive over to the other party where you will collect tokens of participation which hold no value but are still somehow meaningful.

You can avoid this problem by leaving an absentee bid on your item… But why would you want to miss out on the party?

Besides, I told myself that I am getting an auction education and that it is important that I have the full experience.

It is likely that this is also what meth addicts tell themselves: that they are mastering a skill. 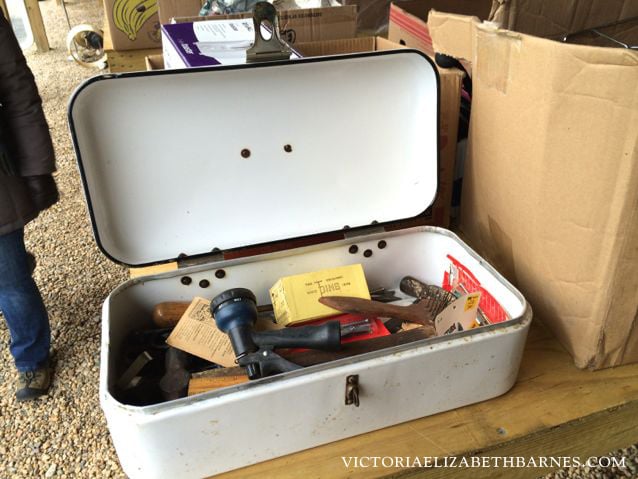 The first item on my timetable was this enamel bin… it’s actually an old bread box. (I explained my enamel-issues in this post.)

This first auction has four separate auctions running at the same time: two inside, two outside.

One of the auctions outside was nice furniture.
The other outside auction seemed to be trash.

The trash auction made ABSOLUTELY NO SENSE to me…There was a large group of people, and they were all really excited about the trash. None of them seemed impatient or weirded out by their peer’s enthusiasm for mungy stuffed animals and plastic cups. 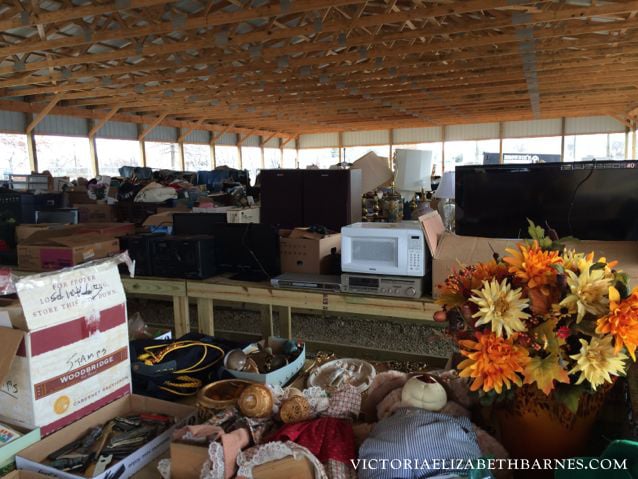 Plus, my expectation that they would auction off each box, and get on with it was wrong. Instead, it was just like there were no rules.

At that point, I considered abandoning my enamel-bin-of-treasure. But the acquisition troll denied the motion. She said – don’t you think you’ve had enough failure in life? We are getting that bin.

I pointed out that more importantly, we did not know what was going on at that other auction 7 miles away, and that was where the really vital item was: the bookcase… The acquisition troll said – you are right. Drive over there and see.
Hurry.
So I did.

In fact, it was SO MUCH FUN… I drove back and forth THREE times.

By 2 o’clock in the afternoon, I was numb.

Numb to crowds of people.
Numb to freezing.
Numb to noise.

Numb to considering running off with the attractive neck-tattooed man who was buying all of the Victorian furniture. 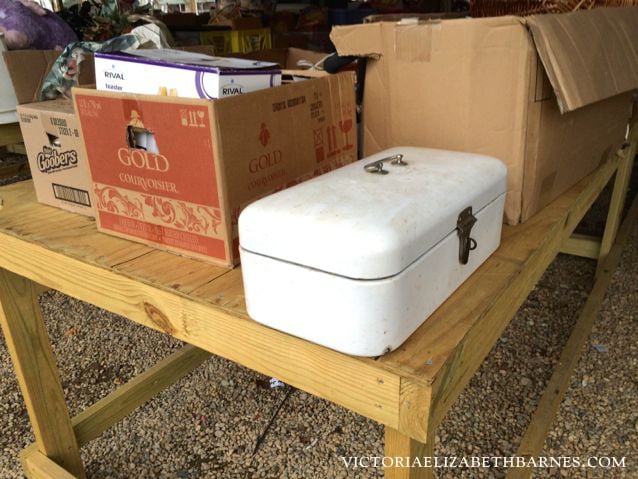 Victory was finally mine in the form of the enamel bin… I paid $12.

I would have hustled right out of there, back to the other auction to bid on the bookcase. EXCEPT that the enamel bin was part of the trash auction and it was auctioned off along with a giant box of canes, some car window/snow scrapers, a couple of tire jacks, some rusty garden tools, and a dish drying rack.

I guess everyone bidding against me wanted the canes or tire jacks because I managed to sell them individually just by saying– does anyone want anything in this box?

I still have two canes, some garden tools, and the dish rack… if anyone is interested. 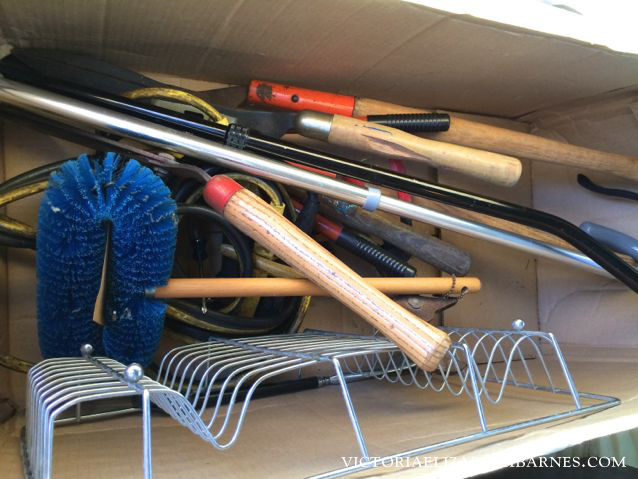 After holding my own impromptu box-sale, the enamel bin cost me nothing… I even made two dollars. But it ALMOST cost me the bookcase.

By the time I drove back over to the other auction, JUST as I was walking in, I could see that they were AUCTIONING OFF THE BOOKCASE THAT I WANTED.

I started running across the auction floor. Flailing my arms. Like an idiot. 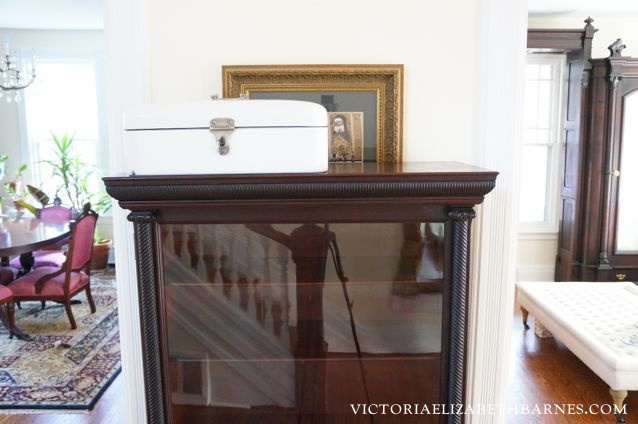 I should explain that this particular auction is the only one I have been to so far where you could actually be confused about what you are bidding on.

Their system involves dragging the item to the middle of the floor… And then moving it progressively towards the loading dock… Even if people are still bidding on it.

Then they bring up the next item, front and center… WHILE THE OTHER ONE IS STILL ACTIVE. 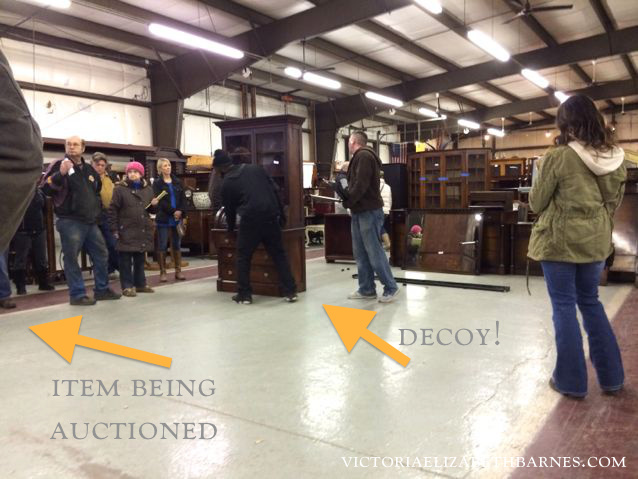 Which is why I was thinking – wow, I am getting a really good deal on this bookcase! Until the guy next to me pointed at the blond, faux-wood, entertainment center being hauled off towards the loading dock… He said– do you know that is what you’re bidding on?

Then I had to flail my arms EXTRA idiotically.

The auctioneer was nice enough to not force me to buy it. Or mock me publicly. But there is nothing quite like standing in front of a large crowd who has just identified you as the dumbest person in the room. 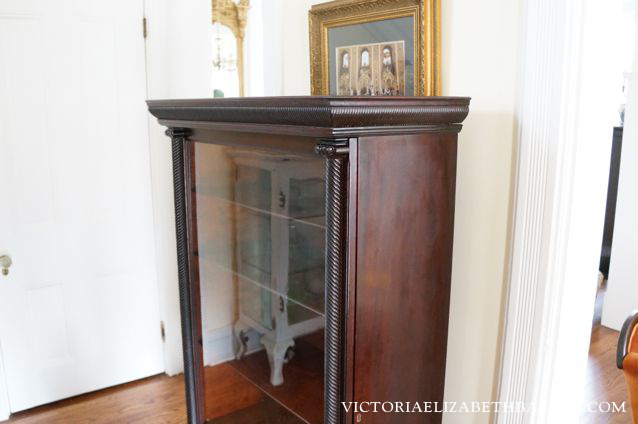 Paul called me right after I won the bookcase… He said– hey, how’s it going?

I said– I ALMOST BOUGHT AN ENTERTAINMENT CENTER FROM 1983!

Paul was quiet. Then he said– should I leave work?

I said– no! Not at all! I HAVE EVERYTHING UNDER CONTROL!