I was worried that Webster’s sadmad after his kittens leaving, would cause him to regress— but he is doing GREAT! He is super interactive with me AND Paul— who had previously been lumped in with the humans-who-are-unnecessary.

He’s still skittish when his acceptable-things-radar gets ruffled, but his comfort level in the house has improved 1,000%.

He used to refuse to leave the third floor.
Now he prefers to be downstairs.

Possibly shortsighted on my part.
Who will keep me company when Jane Eyre moves in? 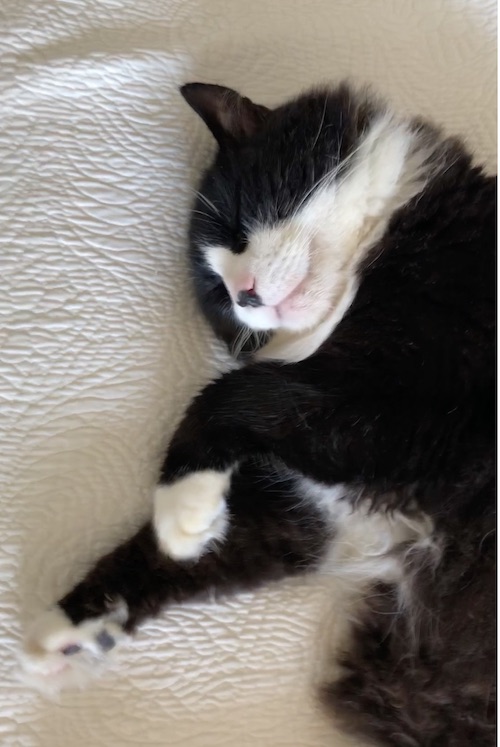 With our schedule, I cannot get Webs new kittens until after the second week in August… then quarantine, so it will be a minute until he gets new friends.

I am just as sad about that as he is.

Me and Webster know:
life is better with kittens.

I believed:
Two male cats
Who are strangers.
Equals problem.

He showed up last year and he has never been gone even one day– he is UNBELIEVABLY the sweetest man!

He and I are very good friends.

He loves to come inside the house.
And he is welcome!

But also, it depends who is inside.
Right now. Is Webster.

This has not been a problem because Webster has been so hidey.
But Webster 2.0 is out and about!

Wednesday morning, Mr. Stray Grey scooted into the house before I could footblock him… I knew Webster was in the kitchen and I ran in there SO FAST.

Mister is so friendly with me!
But he DEFENDS HIS TERRITORY.
Hardcore.

I have seen him.
He is not sweet in battle.

There have been mornings I have gone out and been horrified to see him all scratched up and bloody– so I had REAL reason to fear the worst with Webster!

I made it to the kitchen JUST in time to see Mr. mash on his brakes– when he realized he had LITERALLY nearly plowed directly into a full-grown adult male cat he had never met.

He was like– oh! HELLO!! Will you be my friend!? FYI: IF YOU ARE GOOD THEY BRING KITTENS! Can I offer you a bath? DO YOU KNOW MY SPROUT!? Where are you going? CAN I COME WITH YOU?

More like: one normal lion… who was disarmed by a lion who is an embarrassment to lions everywhere.

Mr. Gray Cat’s home is our front porch; he is ALWAYS out there– and he and Webster have accepted each other entirely, without issue, basically at first sight.

To see him happily lumbering around LITERALLY SMELLING THE FLOWERS.

Aside– I would NOT bring just any foster outside, and he is never out there alone.

After several days of this routine, Webster was feeling very comfortable and also maybe a little jazzy.

So he thought he would give Mr. the signal for playtime— Frankenstein arm.

I said– oh, Webby… sorry buddy, but you do NOT want to play with him.
He will end you.

Anyway.
All of this is to say that I have had two adoptions for Webster fall through.

Not recently.
Before I started writing about him here.

I loved BOTH of the women who planned to take him.
And I totally understood both of their situations that arose.

I was sad in the aftermath of each failure.

But now!
I am THANKFUL that those fell through!

Sending him to either of those homes would have given him a wonderful human companion.
But would have deprived him of the joy he takes in his friends.

And now we have our paws crossed that he is going to get to meet a new lady.
Who has friends for him.

BUT we were uncertain how Webster felt about adult cats.
So it’s good news that it would appear he likes them a surprising amount.

I could have just sent this to her.
But I figured you might like to read it too.
xoxo,
VEB
CPRMR

P.S.
SproutySproutySproutPants and BabyElvisWithTheFlopsyitis, got adopted… I am still having the horribles… but I know THEY are having the BEST TIME and that makes me happy.

Photos from their new mama:

HERE IS THE SPROUT CREW WHEN I GOT THEM

HERE IS WEBSTER AND HIS KITTENS

Kitchen design: get the dish rack off the counter. August garden & other life stuff.