Webster and his kittens… *video*

Life for Webster, my adult foster, has been scary.

Surrendered by his original owners, he sat in a cage for nearly a year… then in quick succession, he was adopted, returned to the shelter, adopted again, and returned… again.

Then he sat in the cage for another six months.

When I took him to foster, he was just a solid ball of sadness.
use the arrows on the photo to see all of his glory.

He was so kind and sweet.
No aggression at all.

But SO curled into himself.
Terrified of literally every.single.thing.
He was not cleaning himself— even his fur was sad.

He let me give him a bath.
IN THE BATHTUB.

I mean, he wasn’t THRILLED about it.
But he accepted it.

I think he figured– whatever.
Life can’t get any worse.

When Webster came, he hid at all times.
So I took his hiding spots away.

He kept finding new ones… HOW did you get IN there?

So I emptied the third floor of ALL HIDING.
Shut the door.
And just SAT.

And he was like— FINALLY SOMEONE UNDERSTANDS.
He became my buddy. 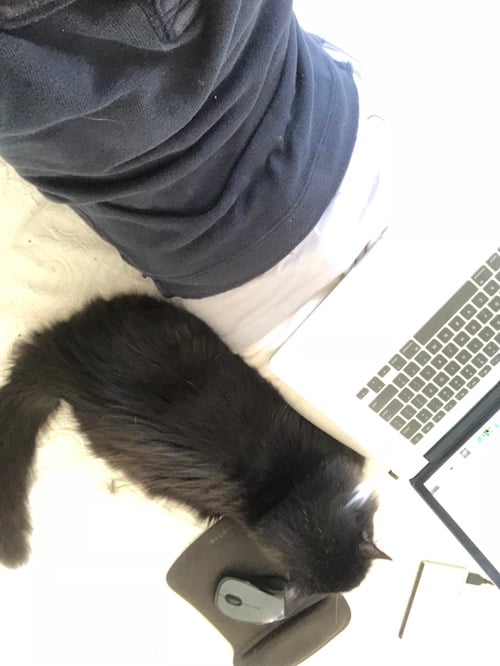 TURNS OUT HE LOVES BEING LOVED.
It’s all he wants— to be someone’s true companion.

But also, now he refuses to come downstairs.
Unknown humans come and go.

Things bang down there.
It’s unnecessary.

The shelter had been told Webster hates other animals.

So my other fosters were not allowed up there.
But kittens don’t care about the rules.

So one day they found him.
Webster was terrified.

THE GAPING MAW OF KITTENS.
Nothing scarier.

But the kittens did not get the memo about how Webster is an old cranky lion *STAY OFF MY LAWN* so they just charged right up to him.

hullooo!
we love you!
do love us?
would you like our butt in your face?
we are going to eat your tail because it is a prehistoric monster that we are stalking!
WHAT IS THIS THING SUNLIGHT MOVING ON THE FLOOR?
your butt smells delicious!
LET US CHECK AGAIN.

I was not at all worried that Webster would swat them.
I WAS worried they might give him a heart attack.

He was OMYGODWHATNOW.
But the kittens INSISTED ON LOVING HIM.

This cat was a SOLID LUMP for MONTHS.

But Elvis the Prequel just does NOT understand NOT LOVE.
She MUST GIVE YOU LOVE.

To get to SEE Webster have THIS MUCH JOY.
I realized: how LONELY he was. 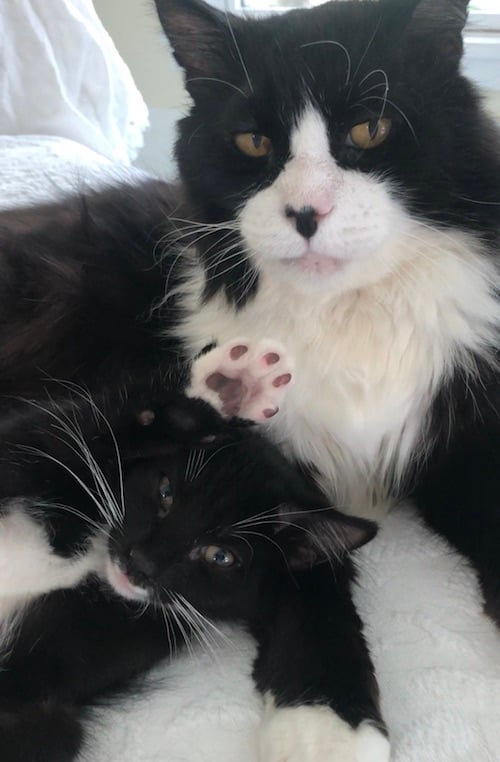 So.
Last week, in my post, about doing  EXTRA DEEP KITCHEN COUNTERTOPS <– I AM STOKED… I mentioned that the kittens were away getting fixed, and Webster was inconsolable… WHERE ARE MY KITTENS?

Truly.
He behaved completely different than I have ever seen him.
ALERT.

He positioned himself in a CONSPICUOUS spot and STARED at me.
HE LEFT THE THIRD FLOOR to wander the house howling.
Returning to stare. 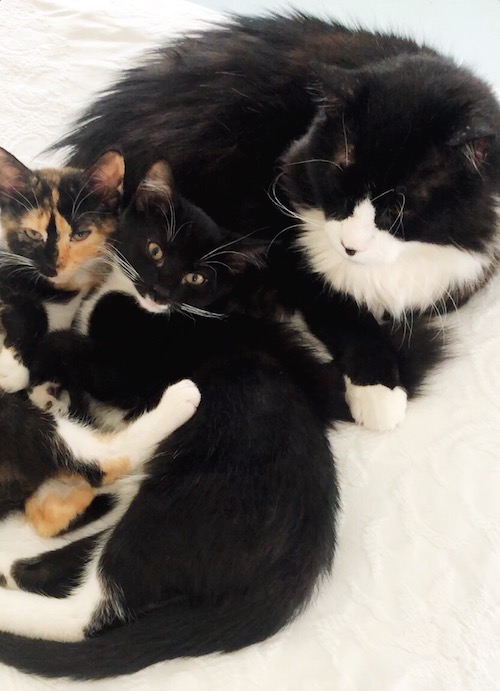 Then.
It was time.

But somehow he did not realize I had brought the kittens up… so he was just staring at me WOEFULLY BALEFULLY… until he heard something familiar… BUT YOU CAN SEE HE WAS UNSURE.

Like, it took him a minute to realize all his dreams had come true.

The life of animals.
At the mercy of humans.
Is hard.

It is the thing that rips my heart out.

We despair for the abandoned cats.
The unwanted dogs.
The sadness.
The solitude.

We lick our lips for bacon.
Living beings.

We pay ardent lip-service to the ideal of motherhood.
We take the breastmilk of mothers.
Made for their babies.

We debate— should females have autonomy?
We exploit the female reproductive system.
For ice cream.

We should all be feminists.
Cheese tho.