My paramour. My inamorata. My one true love: Craigslist.

And?  It is.
It’s totally full of junk and overpriced oak hutches from 1980.

However?  Craigslist is also the source of all awesomeness.  The hutches are just there to scare off the non-believers… To test your faith and weed out the heretics.

Craigslist is like an estate sale, an antique store, and trash night, all rolled into one and delivered to your house.

If you’re not monitoring Craigslist for your heart’s desire?  You’re an idiot. And I LOVE that about you… because it leaves more for ME. 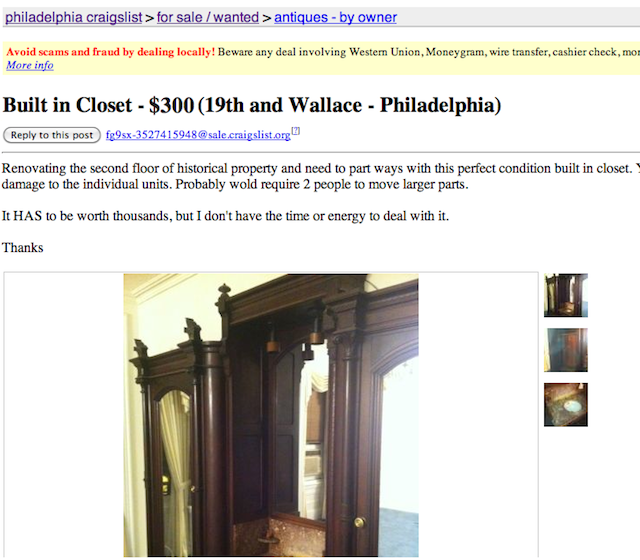 I have a siren in my head that reacts to anything old, broken, giant, gilded, Victorian, fancy, or generally too large to fit in my house… and when I saw this, it went crazy.

I swear to you—if you gave me the option of a Nobel Prize?  Or this?  I would take this.

The text of the ad that’s cut off explains that the house is being renovated into apartments, (near one of Philadelphia’s university areas,) that the wardrobe is in excellent condition… and can be removed without damaging it. 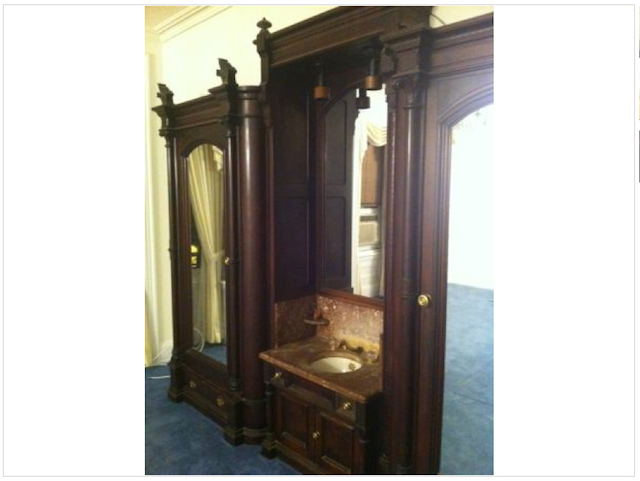 It was Sunday morning, and the time-stamp on the Craigslist ad told me it had literally JUST posted.  Clearly, a message from the universe.

I RAN downstairs.  What Paul calls the Craigslist-charge.  He claims that he can tell, by my footsteps, the degree to which his day has just been hijacked.

And I was like—WE HAVE TO GO GET THIS RIGHT NOW.

Paul said—are you… shaking?
And I was like, please.  Stop speaking.  Put your shoes on.  Hurry.
If someone ELSE gets this I will NEVER get over it.

Paul said—Wait a minute.  What is it?
And I was like—it’s the portal to Downton Abbey…  It’s everything I ever wanted… it’s a MESSAGE from the UNIVERSE.

Let’s take a sidebar here: What is THAT about?
YOU people know what I want to do with this. And you more or less JUST met me.
My husband, on the other hand, apparently doesn’t even live on my planet.

Did I not show him Pilar Guzman’s kitchen, seven hundred times?  Do I strike you as the sort of person who would fail to communicate my heart’s desire?

So I was like—I’m going to put it in the kitchen.

Let me speak SUPER slowly so you understand me.
KITCH-EN.  Kitch…en.  Kiiiiittttcccchhheeeennn.
The room with the stove?

And?  Maybe you remember seeing my dream kitchen?  SEVEN HUNDRED TIMES?
And maybe you can see that this is pretty much the universe manifesting what lives in my head?

In fact, it’s possible I AM CONTROLLING THE WORLD WITH MY MIND.

Apparently Paul was not impressed with my world-bending mind tricks.  Because he said— That is not going to fit in the kitchen. And I was like, oh really?  How do you even know that?

He was like—sure, okay… so how tall is it?  How long is it?
And I was like—I have no idea… it doesn’t say.  But it doesn’t LOOK that big. 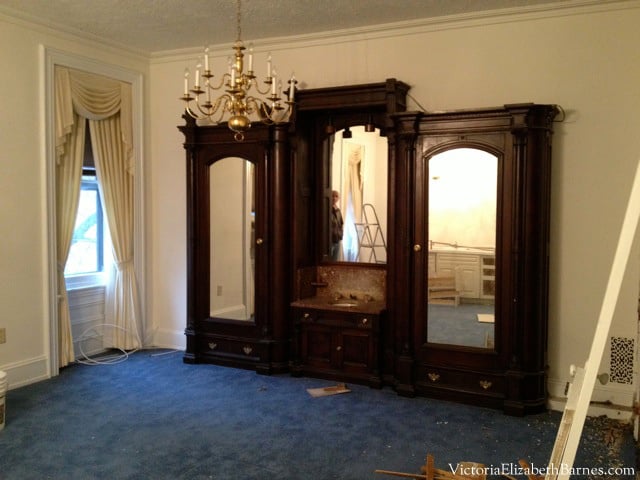 Paul was like, believe me.  That is PLENTY big.  The sink is maybe about three feet tall.  And it’s about the same width, so lets say it’s three feet wide… and in comparison, the side units are even wider, let’s say four feet each,  so I’d say overall it’s between 11 and 12 feet long… which is too big for the kitchen.

What is with the savant-style measuring?  That is beyond aggravating.
(For anyone who wants to keep score:  the entire thing is 11′ 6″ long.)

It is good that I am so skilled at ignoring reality, in favor of what I want to believe… because if I weren’t, I would have to remember that Paul has never once been wrong about this kind of thing.

He had more questions too:  How is it built into the wall?  How does it come apart? What floor is it on?  How will we get it out?  WHERE are you going to put it?

I was like, do you not SEE what I am showing you?
Your questions are IRRELEVANT.
Did I somehow neglect to emphasize my wish for GIANT FANCY THINGS?

It doesn’t matter who, what, where, when, why.

If I keep it in the garage to store my gardening tools in, WHAT do you care?

Paul said– well, can you ask him how big it is?

And I was like, I’m sorry… but you KNOW I can’t do that.  We can go there and LOOK at it, and then decide, but we have to GET there first.

Let me give you some advice about Craigslist.  I’ve learned it the hard way:  if you MUST have something… Do not make an offer, ask a question, or otherwise confuse the situation.

If you MUST have something, and that thing is a monster Victorian Eastlake wardrobe that every antique dealer and salvage company in Philadelphia will be after?  Do not even ask how big it is.

If you want it no matter what?  ALL you say is:

Hi,
I want that.
I can come anytime.
I can move it myself.
I don’t need your help.
Here is my phone number.
My social security number.
My bank account number.

To stand out from the 400 emails the seller is going to get, you have to be the one person who requires nothing.  You have to be a beacon of simplicity and straightforwardness.

Now is the part where Paul says I MUST tell you how I misrepresented the ease with which this would be removed.

In my defense– the guy selling it TOLD me that he had his carpenter look at it.  And the carpenter said— no problem.  EASY.

All you need is a screwdriver.

Plus, I had backup… if you’ve been reading me for a while, you remember Brian, our neighbor… the one who gave me the Asian dolls and used to be an antique dealer?  Well, he and I have become friends…  We are allies in the belief that opportunities like this are rare and must be seized.

He assured Paul that he had removed a couple of these when he was in business, and that they really do come apart EASILY. That they are put together with dowels, and some well-placed screws…  It’s just a matter of figuring out which piece to start with.

Which, technically IS actually true. 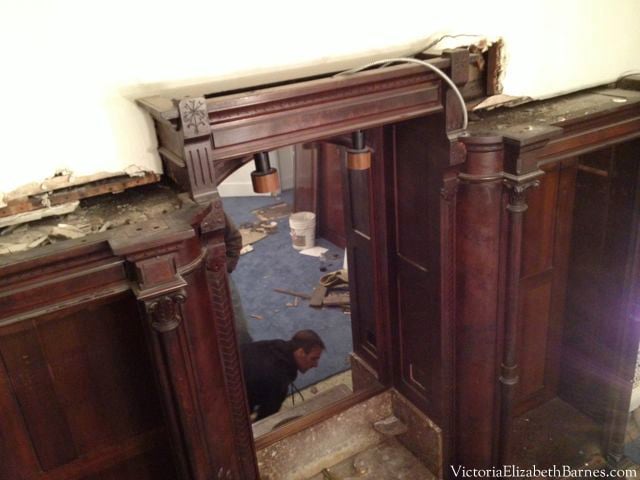 So Paul just took a basic bucket of tools.

We’d been there for about twenty minutes and Brian said—Wow!  This is an unusual piece…  I don’t know how they built this!!  And the guy selling it said– yeah, I’m going to leave, call me if you figure it out…

Paul looked at me.
It was not the look of love.

It was the look that said—you have failed, on all fronts, to prepare me for this job, and I cannot believe I relied on you to accurately gauge the situation, and now I am in an unheated building with no tools or skilled assistants…  I am surrounded by idiots.

After an entire hour—all we had done was remove the doors.

By that time, Paul was aggravated.

Which morphed into SUPER aggravated… when he finally figured out that the magic-keystone-starter-screw was on the BACK of the wardrobe.

The OUTSIDE of the back of the wardrobe.

But I am only the finder.
Paul is the getter.

I DID my part. 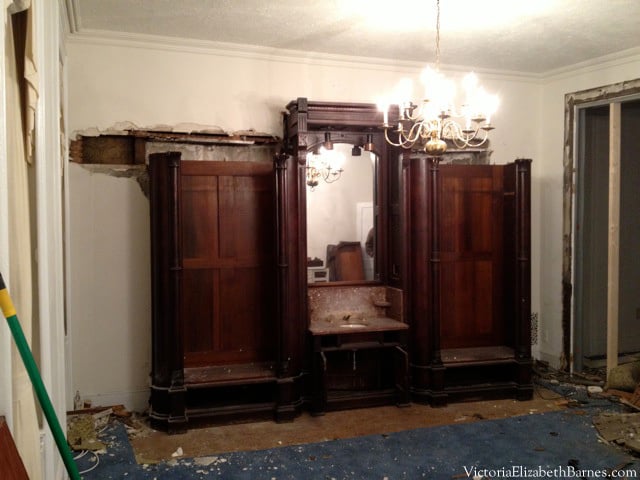 It turns out that Paul is like the James Bond of demolition.

James can blow up a car with a bottle cap and a pack of matches…  But MY husband can take apart a wall with his bare hands and a hammer.

James?  You have NOTHING on my husband.

Plus? James?  You international man of mystery?  My husband is totally more mysterious than you. 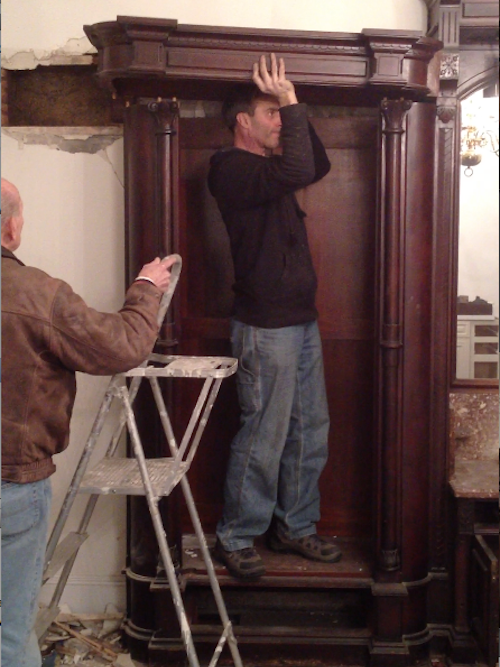 As we got further along, it became clear that the wardrobe was added after the house was built… it was brought in, in pieces, assembled, pushed against the existing wall, and then they built a false wall around it to make it appear built-in…

Paul is sure this was the wife’s idea… and that she and I would have gotten along just fine.

Incase you’re thinking that Paul was getting some satisfaction from making progress… this photo should set you straight.

In fact, he may have used the phrase:  fool’s errand. 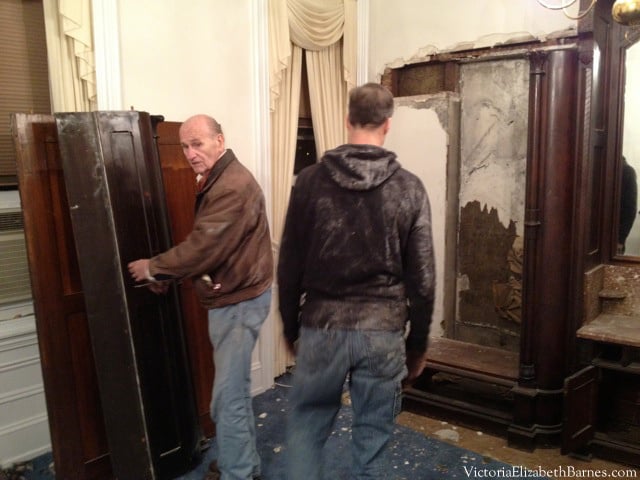 This is hour three and a half…

By now it was COLD… The building is being renovated into apartments, and there was no heat.

Was anyone having a good time at this point? 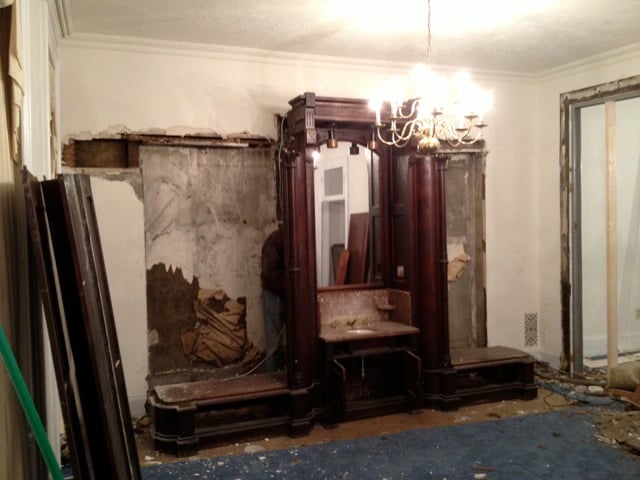 I tried to be helpful… and motivational… and point out the positives like how the wardrobe itself REALLY did come apart with JUST a screwdriver.

Also, I tried to tell Paul how MUCH I love him!!

Which I cannot say he appreciated…

Usually if you tell your husband— I adore and worship you!!  There is a base-level expectation of pleasantry in return… not the stone-faced response of—I will never ever, ever, ever do this again.

Which is a total lie!!  We will DEFINITELY do this again.

We will do this as many times as Craigslist deems necessary. 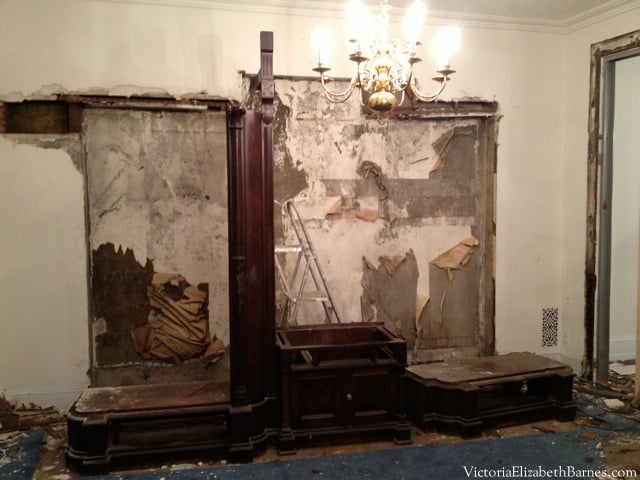 Although, as it turns out… Paul was correct that it will not fit in the kitchen.
In fact, it nearly doesn’t fit in our house at all.

Literally—it barely clears the ceiling at the tallest fancy piece.

To repurpose it as kitchen cabinets, we would have to chop off six inches on both sides. And I don’t think I can do that.  Even though it would solve all my kitchen problems.  (Or create entirely new ones.)  It’s too beautiful to destroy.

So it’s residing in our living room… the only room in the house with a wall long enough… we left out the center section to accommodate the window.

Does it make the room feel tiny?  Yes.
Does it utterly destroy any kind of feng shui?  Yes.
Did we have to remove 47 things that used to live in here?  Yes.
Does it make ALL the other furniture the totally wrong choice?  Yes.
Do we need a bigger house now?  Clearly.

But it doesn’t matter.  I LOVE it.  If given the opportunity to get fifty more, I will. 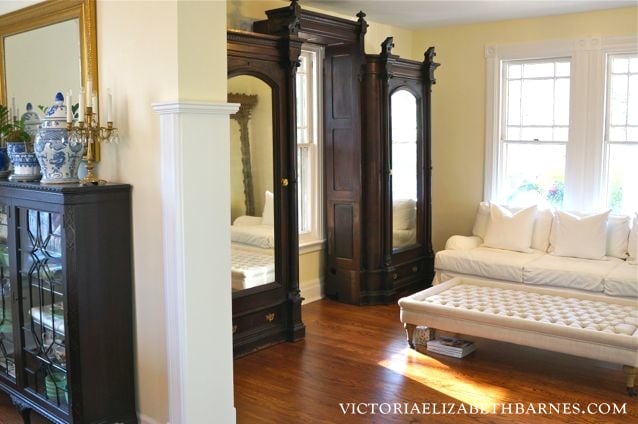 He said– What is it?

And I told him–  It’s the PORTAL TO DOWNTON ABBEY.

And he was like, one side, sure… but the other one definitely goes to Narnia. 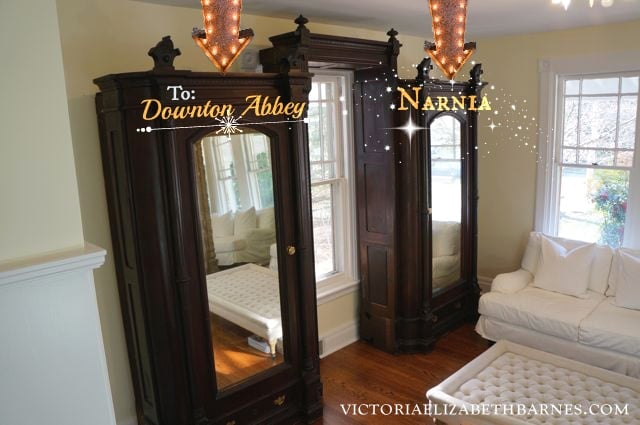 I shall be both dog and pony. — Roger Sterling Philadelphia Elvis Fest… confronting the existential question of why my best friend lives so far away.