DIY house renovation— a death-defying stunt for your marriage.

Victoria Elizabeth Barnes My Favorite Posts, Our Story Construction, DIY, frustration, how we got here, Marriage 60

Two posts ago, I went back to the beginning of our house renovation—how my husband and I decided to buy an old house and fix it up… a decision based around the front-door’s antique hardware.  And an imaginary before-and-after picture that lived in my head—a picture designed by a DIY-enthusiasm that came from not ever having fixed anything.

We thought it was a good idea to move into a crumbling Victorian house… restore it… do all the work ourselves… while living here.

If you missed:
Part One, we tour the house and decide to buy it.
Part Two, we move, begin renovation, and reality sets in.

This is Part Three, where I realize the true meaning of fixing up an old house.

For the first two years, there were always multiple rooms with “containment issues”  Meaning:  one part was “livable” and the other was trashed.  Destroyed.  An explosion of plaster and lath and 120 years of dust.

And we were always trying to keep the “trashed” part separate.  Or?  One of us was: me.
The other of us thought containment was over-rated.

The other of us thought the ONLY acceptable use of time was action… To wade in and just GO. 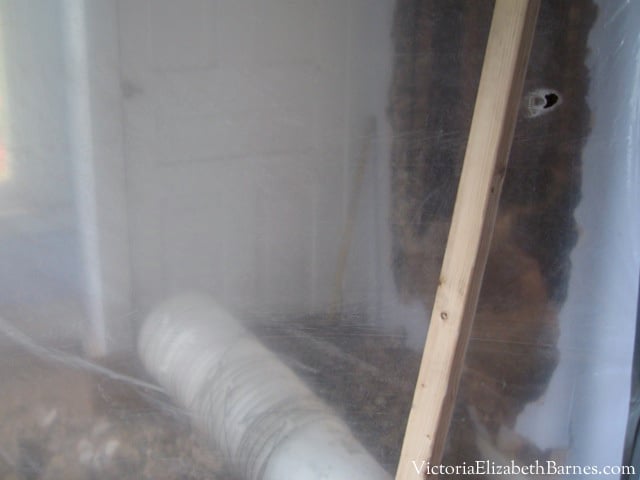 Any old house renovation, that keeps Victorian closets, has far fewer shoes than I do.

I wanted to try to maintain some semblance of normalcy. I wanted a debatably-effective shield against the destruction and mess of old house plaster.

Paul just wanted to get started.

And?  Maybe he was right.  Maybe it WAS a waste of time to try to keep one half of a room marginally “cleaner” than the other.  Maybe it was “fine” to just shut the door and let the entire room descend through all nine rings of Dante’s inferno.

But?  If your wife needs you to build a debatably-effective shield?
You’d be better off building it, than debating it. 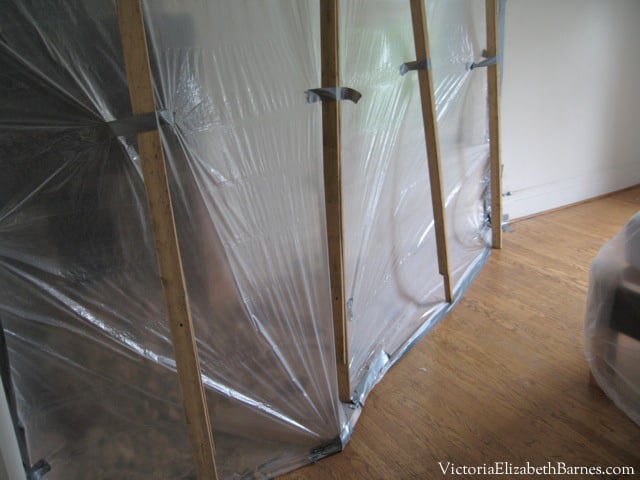 The action-siren in his head was so loud; it was impossible to even get his attention over the noise.  Even if he appeared to be listening, I could tell that he was not.

And it made me nuts.  Not that his brain was full of stuff other than me.  But that he could not hit pause, long enough to truly listen to me.  To HEAR me.

It made me insane.  And I couldn’t even explain to him HOW INSANE it made me, because he was not listening. 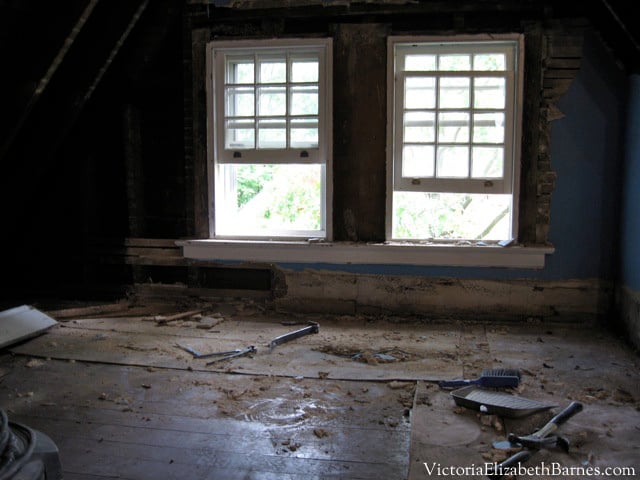 I wanted a buffer zone.  Where you could enter a room and not have the floor crunch underfoot.  To not crush plaster into powder.  To not let the turmoil just eat our house indiscriminately.

Even more than that… I wanted to feel like this WAS a house.  And not just a nuclear testing ground.

I guess we were both right.  Although, personally I feel like I was MORE right…  In Paul’s defense, it wasn’t just the plastic bubble I wished for.  It was his need to absolutely stomp on the gas.

To begin, and not stop.  To set in motion, seventeen projects at once.  To start on the third floor. But also rip apart the master bedroom.  Plus?  Begin tearing out the half bathroom that’s IN our kitchen.

And?  Since we’re at it, to also remove what was either the world’s smallest walk-in shower?  Or a custom dog bath the previous owner built in the basement…  Complete with marble tile floor. 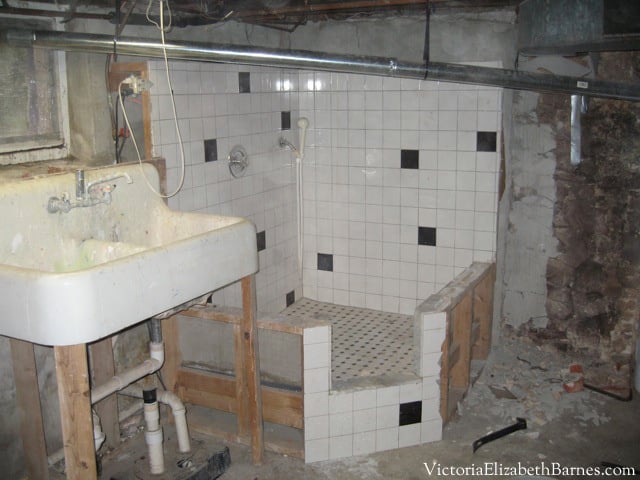 And I was like—WHOA. What?  No.
We CANNOT explode every room in the house.
We cannot have chaos.
We need order.
A plan.

To say Paul stared at me slackjawed?  Does not cover it at all.

He may have said:  I have to be in charge here.

And I was like, I’m sure that’s an age-old frustration that you can discuss with your caveman-ancestors… but in the meantime, I’m about to give you a lecture. Let me begin with Chapter 12.  Part A, Section 2, Bylaw 37.8.

Please get out your notepad.

Of course, the real problem isn’t that Paul is a caveman.  He’s not.  He will listen to Abba and once wore a silver lamé shirt to impress me.

The problem isn’t even that we bought a house that has “issues.”

All of our problems have stemmed from the fact that we are alarmingly similar.  Twin like.  We are both control freaks.  In this case, Paul is the more knowledgeable control freak. But I am the bossier control freak.

I have wrested control of The Republic of House.
And there will be NO FURTHER ELECTIONS.

This has driven Paul mad.  The VERY thing he is best at:  getting shit done.  Has been cut off at the knees by someone who KNOWS NOTHING ABOUT IT.

And?  There is nothing he can do about it… A fact that has left him absolutely stymied.

Paul is a fixer.  And there is nothing he can do to fix this.
Like a mobius loop of aggravation.

Anyone who has ever asked Paul to help them sheetrock their ceiling.  Replace their toilet.  Tile a floor.  Design a bathroom.  Hang cabinets.  Show them how to do masonry work, or any detail-oriented project… will find it impossible to believe—that there could be someone more Paul than Paul.

Those people? Who have experienced Project Paul?  Will struggle to imagine a more extreme control freak could even exist.  And then they will waffle between feeling sorry for Paul, and being delighted that he is finally subject to his own medicine.

I would feel badly about this.  Except?  Paul does not at all feel badly for making me crazy.
He feels entitled.
Certain.

That his way is the RIGHT way… that the only way through chaos is STRAIGHT through.
No detours.
No sideshows.
No trips to the circus. 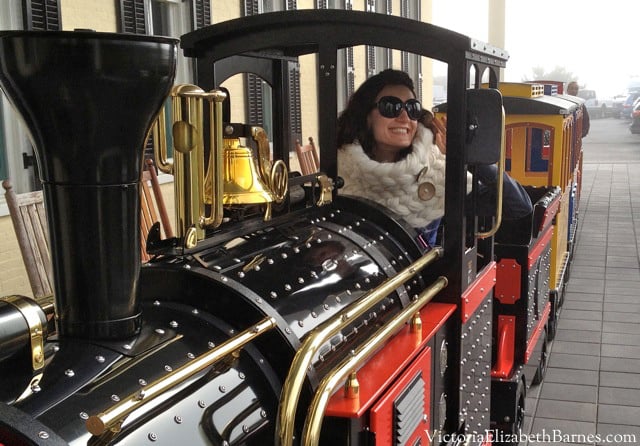 And?  If any pause in action is defined as a wasteful-squandering of precious time? It places me, by default— firmly in the category of circus-goer. Like I am all circus all the time.  Like I just want to eat popcorn and swing on the trapeze and play with the clown car.

I’ll love you even more, if you share me with your friends…

How we got here… Part Two: I reconsider my ideas about house renovation. Meet our kitchen… the previous owner’s DIY masterpiece.