Reclaimed marble slabs for our kitchen countertops. (AND another grand piano) *video*

So. We got another square grand piano.
(Here is the first.)

Somehow in my world, this is not really a big deal and what I’m actually writing about are the marble slabs that were also headed to the dump.

But the piano is how we got there, so I guess requires some explanation. 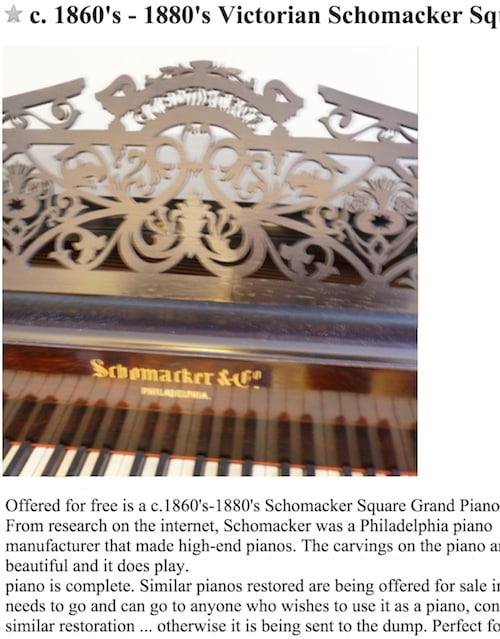 This was the umpteenth free antique piano of this style on Craigslist… It was nearby. And it was made in Philadelphia.

I saw it on Craigslist on a Friday. By Sunday, I had annoyed Paul so much that we went and got it… To be fair, I think Paul was correct: we do NOT need another piano. But I think I was also correct: this is not a piano that should go to the dump.

Shoenbacker is a fantastic piano, and it says Philadelphia– both on the front in gold leaf, AND inside on the plate; the sort of detail I become obsessed with.

Besides, we are practically professional piano movers by now!
IT’S WHAT WE DO.

I know that some of you will wonder: but what did you plan to do with it?

And the answer is: I didn’t think I’d DO anything with it!

I thought: here is a free Giant Fancy Thing!
I should get it.

And yes, I do understand that thought-process is how people end up living in houses filled with free grocery circulars.

So:
Guy getting rid of this piano was rehabbing and needed it gone immediately.
+
I am someone who is comfortable with the possibility of having a piano in every room.
= a match!

Although, it turned out that the actual equation was:
spare grand piano ÷ funding issues for CLOGS = sold piano.
(The person who bought it is restoring it to play!)

Now for the exciting part:

The day we went to get the piano, Paul and I spent some time talking to the guy about his old-house restoration, and he ended up giving us a tour.

Upstairs in the second-floor hallway, there were three LARGE slabs of solid marble shower walls.

The guy gestured to them and said how he was going to have to pay someone to cut them up to get them downstairs. Because MARBLE SLABS ARE HEAVY.

And I was like – my friend! We can help you with that!

It’s hard to say if the marble shower was part of the original home, (built in the first part of 1900.) Shower stalls existed, but they were not common or popular until later in the century… but on the other hand, this part of Philadelphia has some extraordinary houses and it is likely that builders were using these materials, so anything is possible.

If you enjoy reading about this sort of thing, the history of American plumbing from 1840-1890 is fascinating. And also the evolution of modern convenience.

Now.
I hate this part of a Craigslist pickup.

There is something deeply uncomfortable to me to be in someone’s home, taking something from them, in the most vigorous, potentially-stair-destroying way possible.

There is simply no way to unobtrusively dismantle a grand piano, or wrestle three giant slabs of marble down a flight of steps… And I end up feeling like not only are we intruding in their home, but also like we are hosting a circus ON THEIR STAIRCASE.

Adding to the weirdness, I am now a person who scurries around taking pictures and video of the circus… I assume my behavior is completely inexplicable to the homeowner, and that they must think I imagine myself the Werner Herzog of Craigslist.

So, please enjoy my latest cinematic masterpiece: a dark (sorry! the house was really dim!) and gritty (sheetrock dust) film exploring the cultural landscape of free stuff on Craigslist.

see all my best Craigslist finds!