Paul was on vacation last week… a relaxing span of days spent dismantling and then rebuilding the back wall of the addition to put windows where we used to have a bathroom.

If you’re new, you might want to see the kitchen the day we moved in, or get the full story of the (horrible) half-bath and why we took it out.

I wasn’t here for all of it – I had work, a new stray cat to wrangle, and circuses to protest (there were three in the last two weeks!)

I already wrote about why the circus makes me sad, but I am compelled to repeat: in the wild, tigers can travel up to 20 miles a day… In the circus, they live in tiny travel cages. The only time they are allowed out is to perform.

The unmitigated despair of this existence is horrifying to me.

I know you come here for entertainment, but I cannot handle this on my own anymore without having some kind of nervous breakdown. 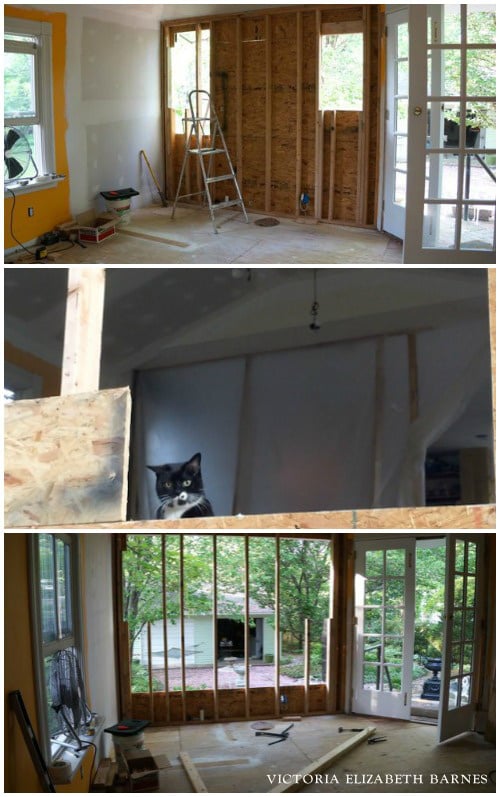 So. Windows… I missed some steps, but I think the process is self-explanatory; hopefully you can imagine/follow along.

Fortunately I captured the important part: Elvis supervising the process.

I won’t bore you with the boring parts, ex: the way I found choosing window size to be agonizing… surely, a wrong-half-inch in either direction would have have ruined the entire thing.

How do you like our security system? It looks very… secure, no? 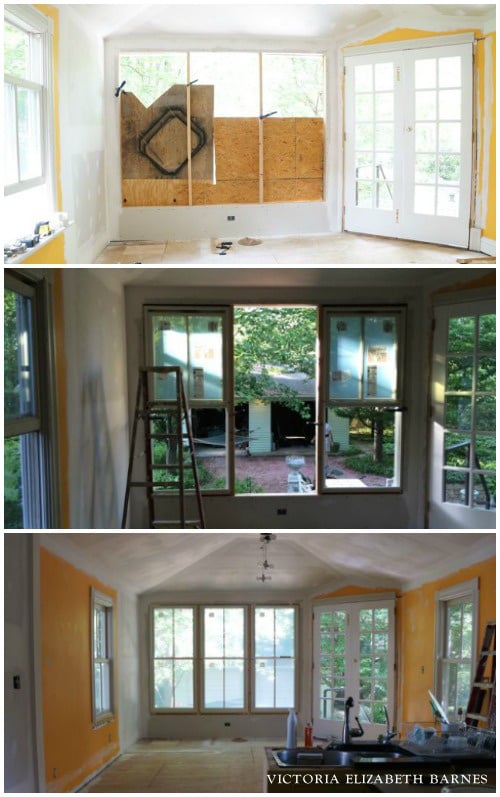 The back doors are salvaged from an old storefront in Philadelphia; they are super tall and I love them. BUT the hardware that was on them was generic, unappealing, and mismatched.

Just like the piano hardware quest, I’ve been looking for hardware for the back door… and it would SEEM that what I am shopping for is something broken. Because, so far, those are the only things that appeal to me.

As Paul was ripping plywood off the back of the house, I thought it would be a good time to show him some hardware options.

I could see in his face this thought: must everything be “special?” So just to appease him, I did look at some reproduction hardware. FYI: you can get some truly GIANT and super fancy and also incredibly shiny door accessories. (Which would also make impressive earrings.)

But it’s too late because I’m already attached to some broken, old, non-working knobs that are not really knobs. And have no lock. And also is not a set, because there is only one. And I need at least two, preferably four.

Not that any of that matters, because once I decide that something is “mine,” I become irrationally attached to it.

Now this post is over. I am not at all satisfied with it, but this turns out to be one of the rare occasions I have nothing more to say.