How we got here… Part One.

This is the first of three posts…Part 2, Part 3.

Over three years ago, my husband and I bought an old house.
There were a lot of reasons… but none of them were necessity.

Our previous house was perfect.  A 1920’s Arts and Crafts cottage — charming and adorable and pristine. Although, woefully undramatic.

Paul had finished every last inch of that house. And he had done it all before he met me.
Which A- demonstrated to me: Paul’s magical fixing ability.
And B- showed me NOT AT ALL: the work involved.

We looked at this Victorian house out of… curiosity?  Possibility?  Because it was there?
Because we are the sort of people who look at houses they do not need?

Because we cannot afford Downton Abbey? 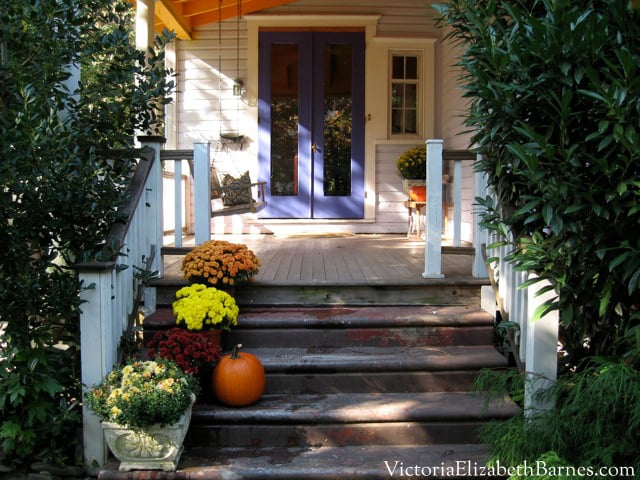 I love anything Victorian, ornate, crazy, giant, old, gilded, broken, or useless… This house wasn’t giant or ornate.  It didn’t have elaborate moldings.  It wasn’t even much bigger than our old house.  But it was definitely Victorian.  And broken.

But I didn’t see the broken parts.

I THOUGHT I saw them.  But what I really saw was something Paul could fix.  Those are two separate things.  But I combined them into one idea: broken things that can be fixed/therefore are not broken.

In fact, I was able to overlook ALL the house’s problems.  Because Paul would fix them.
In my defense, this IS correct.  But I didn’t understand the 18,956,324,072 steps between broken pile of crap… and finished product you will enjoy living in.

I have an affliction/ability to look at something long past fixing.  And see what it once was.  And if that thing was originally incredibly beautiful, it doesn’t matter what it looks like now.

I’m talking about things that have been broken for years.  Things no one has cared enough to maintain…  Which is fine– if it’s something that costs five dollars at a yard sale, and you can put it on your mantel and call it architectural salvage.

But if you’re buying a house, I recommend you weigh your soul’s desire to own the hinges.  Against the possibility that the house will collapse around your feet.

For me, the hinges on the front door were the only salespitch I needed.

Paul?
Did you see the hinges?

Paul gave me his signature look.  The one that says: CALM DOWN.
Not to be confused with his other signature looks: Have you seen the hammer?  I’m busy.  Hand me the crowbar.  You’re working too slowly.

In return, I gave him mine.  The one that says: I have seen something.  There will be no talking me out of it.

Do not try to keep me from the hinges.

We left.  And I didn’t say anything about the hinges.  This is what my mother calls choosing your battles.  And what I call: sending threatening, psychic messages.

We talked about it.  We made lists:  the pros-and-cons of exploding your life and living in a dumpster…  At the time, I thought this was how everyone made decisions about buying a house.  And?  To me?  It was a very nice dumpster… with a wraparound front porch.

A nice dumpster that could be had for a good price, if we were willing to overlook certain things most people take for granted in a home.

Paul said things like—the house is LITERALLY full of holes.  Their heating bill MUST be at least $1,000…  So I made a note:  call power company—get average electric and gas bill.

But?  In my head, I was already lying on the divan.  Ringing for tea in the library.
Also, I thought I’d better start shopping for silk dressing-gowns.

Paul said—the FIRST thing we need to do is insulate the attic.
I was like, absolutely.  By all means.  Totally.  That’s where the library is going.  So we’d better get to work on it IMMEDIATELY.

Paul did not fall in love with the house the same way I did. He certainly liked it… in fact, it was his idea to go look at it.  But it appealed to him differently than to me.

He saw ALL of the problems… without the hazily-conjured idea of how they would just sort of magically fix themselves.

He certainly wasn’t imagining tea in the library.

Paul is a man who cannot stand sloppy workmanship or uncareful stewardship.  The kind of man who bundles construction trash neatly and pulls ALL nails out of scrap wood…  Even though it takes forever, and as far as I can tell is a total waste of time…

He was finished the house we lived in.  Therefore he could do another one.  And this was a house that needed doing. Someone would fix this house… why not him?

So we bought it.

Okay. I have to go write Part Two… come back later.  Or sign up below, to get email updates.  That way you don’t have to sit in front of your computer for the next three days, hitting refresh.

Bath Remodel: Fixtures and Vendors How we got here… Part Two: I reconsider my ideas about house renovation.