One last hurrah… giving up a repurposed kitchen design.

Since the beginning of time, I have been shilling an unconventional/repurposed kitchen with all the zeal of a late-night infomercial.

And for the exact same amount of time, my response has been: Giant Fancy Things are out there… WHY NOT NAIL THEM TOGETHER AND SEE WHAT WE GET?

Every conversation we’ve had about this idea has ended with Paul assuring me that the end result will look crappy and homemade.

And me trying to tell him I am fine with that because it will be crappy FANCINESS THAT IS OLD.

So I made these faux-kitchens to SHOW him that I had a clear, specific plan… Not that the plan is executable – but it EXISTS… To me, this is basically the same.

When I showed the mockup to Paul, I asked him – does this appeal to you in THEORY? I mean, I understand there are a lot of variables. But does the hypothesis appeal to you?

And Paul said – no… Finding any piece of furniture that is an exact fit is going to be impossible. Then it is going to be up to me to retrofit it. THEN not one single piece will be perfectly level. Then cutting into furniture and keeping the stability and integrity to support the counter. Then matching veneer, stain, patina of the wood… It’s madness.

We have had this conversation at least 57,000 times. The first 56,999 times, the conversation was a prelude to me going out and buying some piece of craigslist crap that is now stored in the garage.

I would have blogged about them, but generally, immediately after bringing them home I found that Paul was right after all… (But that I was also right; because now they are mine, and no one else will be able to have them.) 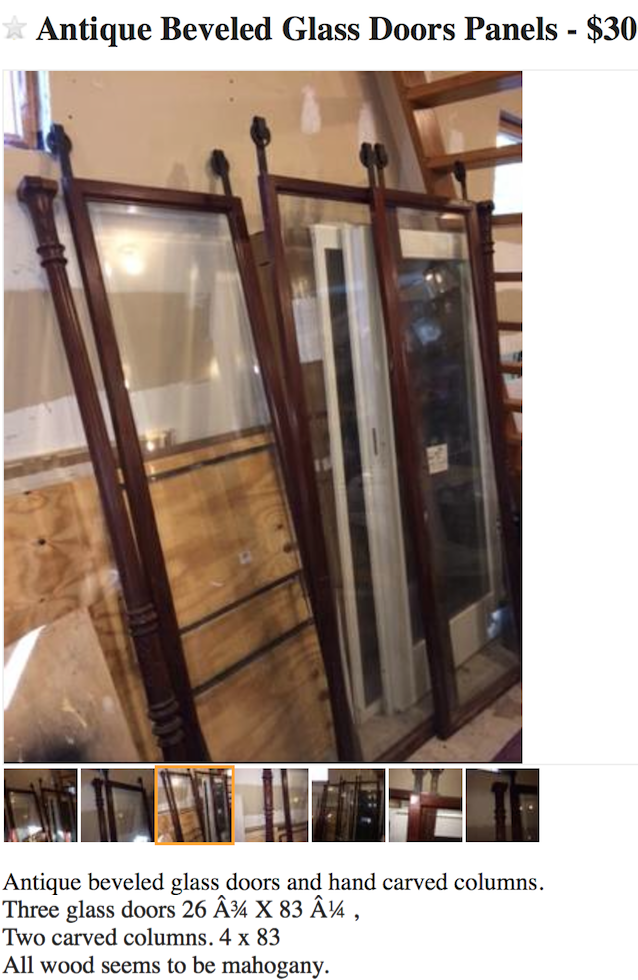 Now for some life-hodgepodge… over the last few weeks, we spent vacation at the beach with Elvis, my parents, and my brothers and their significant others… came home and did the 19 loads of laundry mysteriously generated by two people in one week of vacation… picked the 50 pounds of cucumbers that grew in seven days, finished an enormously stressful work project, took Elvis to chemo, picked another 50 pounds of tomatoes, froze 10 vats of pesto, (which grinds down to nothing,)… and informed Paul that all tomatoes other than Brandywine are nonsense, and his feelings about getting an earlier crop will be disregarded next year.

We also had our eleven-year wedding anniversary, (watch our wedding recap,) and Lara got married… which I ended up going to alone, because for my own sanity, someone had to be with Elvis, and even though my mother volunteered to come stay with her the days we were gone, A— I only trust Paul to be able to give her the pills. And B— I don’t want Elvis’s routine disturbed.

On top of everything, I was in this wedding, and the weeks leading up to it had a lot of bridesmaid-dress-drama that would be unbelievable as fiction… summation: I didn’t have an actual dress until two days before I left.

Anyway… normal  chaos should resume now, and my absence here is over. This post is supposed to convey that I am saying goodbye to a repurposed kitchen option and we are going to do traditional cabinets around the exterior walls.

It is hard for me to say goodbye to the possibility of GFT’s and the certainty that one day I will go to Craigslist and THERE IT WILL BE. (Which will obviously happen the exact day our cabinet order is finalized and non-refundable.)

But the time for making decisions has come and gone… And an arrangement of repurposed materials has failed to coalesce.

You can stop reading now… nothing else interesting is going to happen. I’m just going to write a bunch of words about what we are NOT doing.

There are plenty of problems with these mockups, but the biggest one is that none of these base cabinets exist.

I mean, I have SEEN plenty of antique sideboards. But none of them have actually been the right size where you could cut off either end and have the side-pieces fit the space perfectly… not to mention also being magically the right height for the countertop.

Aside from the slight problem of zero materials that fit in the space, the second issue with doing anything nontraditional around the perimeter is:
A – how do you connect the two walls? Are they two separate kitchen areas?
B – assuming the sink and stove area must be separated because how can you wrap an antique buffet around a corner… you are losing a lot of counter space.

But forcing the sink wall to be unconnected to any other counter space would have given me the option of using this vintage, standalone sink. 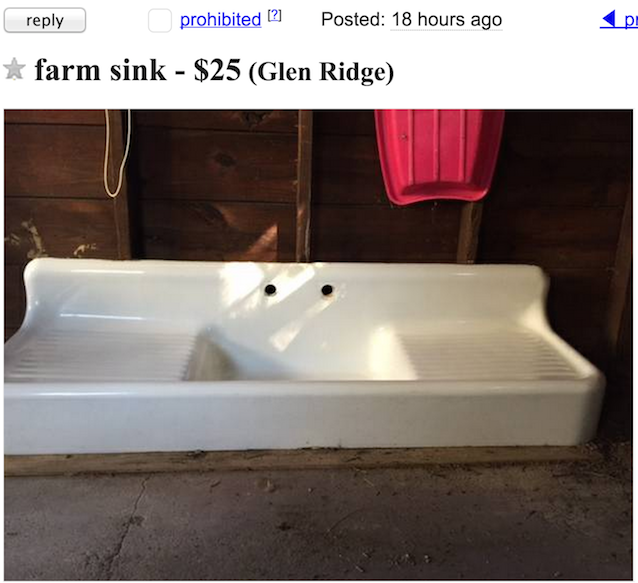 $25 is a crazy good price, and this was a rare instance when I was GLAD some Craigslister beat me to it… I would have been compelled to drive far to get a sink that I really have no use for, just because the price was so good.

Vintage apron-fronts with a centered basin are expensive, depending on condition. Here is one on eBay for over $2,000. (Even more rare is a double-basin and double-drainboard sink.) 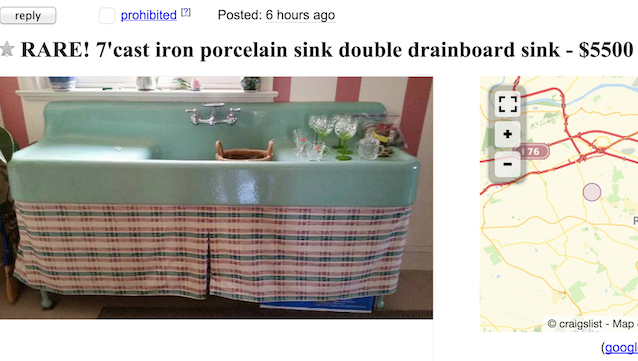 Okay, random end to post… I hope you all are enjoying the last bit of summer!

Where I’ve been: sad. Planning our DIY kitchen remodel— tentative layout and design.