The Glitter Troll is disappointed.

After I hit publish on last week’s post, I had to go participate in real life.

By the time I got back here, I realized that what I thought was a post about the way you can get carried away on the internet in the middle of the night, could also be interpreted as: hooray! I ordered a glitter canon!

By the next morning, I was really panicking… I had so many comments speculating on the extravaganza I was sure to reveal— expecting the rebirth of Liberace and Louis XIV hopped up on speedballs of glitter and hot glue and way more trips to the craft store.

The logical thing would have been to jump right in and try to do damage control. But that is not how I operate… I cannot determine between crisis and normal everyday event. So I just respond to everything as if it’s a crisis, JUST INCASE.

And last Wednesday, the crisis was that I sent all those boxes back.
The only thing I kept was gold craft paint.

Before you boo me as a traitor to the cause of glitter and excess, let me assure you that I realize I have made a terrible mistake.

Let me also blame Paul… He is the reason I sent it all back.

I have since rejected his false prophecy of holiday rabies being optional or unnecessary. But at the time, he was very persuasive.

Particularly after I explained to him the Sisyphean-cutting-of-cardboard-into-whimsical-but-highly-specific-self-imposed-straitjacket-garland, and how I would need him to set up the saw to cut complementary plywood shapes.

My hair was standing on end and I was surrounded by 37 boxes of crap… so I thought that should have been obvious.

I said— ALL OF THE SAWS!

My ideas were preposterous… time-consuming… on par with DIY-ing your own full-scale Eiffel Tower out of popsicle sticks and string: pointless, but of interest to the neighbors.

But the more comments I got, the more I panicked.
I thought about re-ordering all of it.

I panicked more at the idea of welcoming ALL OF THE CRAP BACK… spending day and night for the next week doing nothing but slaving away— driven by pure demonic rage at myself and self’s idiocy in these categories:

Why did I listen to Paul?
How could I have so seriously misjudged my responsibilities?
When will I stop making such glaring, hideous errors of judgment?

My anxiety ramped up and up. To the heavens. To infinity.

I felt like screaming— I’ve ruined Christmas! And then running out into the night and sacrificing myself to the gods of regret by lying down in the street and hoping that someone would run me over.

But I couldn’t go out into the street and wait for someone to run me over until I had emptied all of the dishes out of the kitchen cupboards so that Paul can start dismantling stuff and also so that we can begin storing all of the kitchen stuff in the dining room, and not be able to find anything, which Paul insists on doing now instead of after Christmas when it might be slightly less stressful and chaotic.

As we were going back and forth between the dining room and kitchen, Paul said to me– I read some of the blog-comments you were talking about!

Then he said, AND I QUOTE:
You had better have something REALLY good, otherwise PEOPLE ARE GOING TO BE SO DISAPPOINTED.

Then I stared at him with extra silence— to give him time to absorb the way his language failed to encompass the important turning point that had happened four days before when he CONVINCED ME TO SEND IT ALL BACK.

Then I said – you live here. Do YOU see anything spectacular happening?

Do YOU see the Christmas Eiffel Tower nearing completion?
No, ofcourse NOT.

BECAUSE YOU TOLD ME TO SEND MY SUPPLIES BACK. 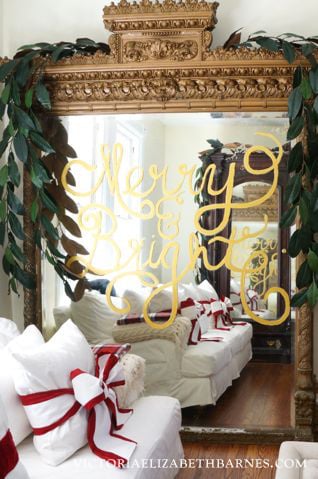 Now, some particulars:
1. I got the magnolia leaf garland at an estate sale. I’m not sure if I love it, but why pass up buying extra crap you do not need if the crap can be had for a good price?

2. All I used was gold latex craft paint… despite TRYING to overcomplicate it.

The letter M started to get a little lumpy, because I could not leave well enough alone… I kept mixing in shiny things and adding layers of OTHER gold things. Because, SURELY I could improve on something I was already totally satisfied with. Why stop?

Obviously I tried adding glitter. And I don’t know how to tell you this – but I did not even like it. I do not know what is going on here. What could be next? Minimalism?

The problem with the Internet is that you can buy stuff in the middle of the night. Let’s start the year out right – giant antique card catalog.