The most exciting part of this front porch project?  When we actually PAID someone to do work.  It goes against everything Paul stands for… but sanding a floor is the one task he’ll allow someone else to do.

If you’re wondering what it’s like?  To pay someone?  It’s unbelievably awesome.

I left to go to the farmer’s market and the library and an estate sale.  Because when you pay someone else to do work, you can leave your house… and when you come home it’s magically finished! 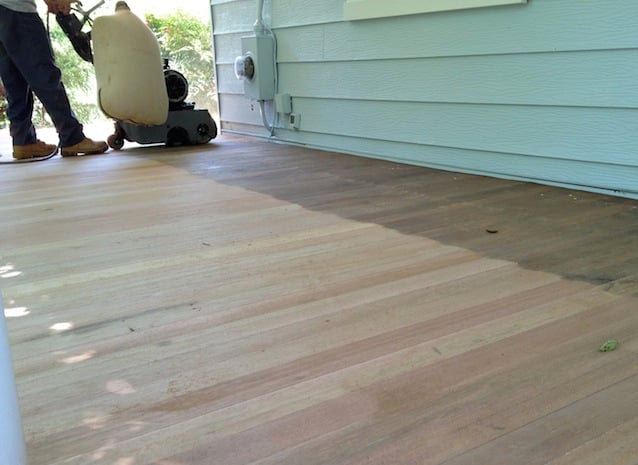 Step One went fine.  But when I got home I said—Hey!! How’d it go?  And Paul showed me the can of stain.  And? It was NOT remotely the same color we’d ordered.

Why we did not think to OPEN the cans, or look at them, or check that they were the same is beyond me.  But like idiots, we assumed that we would get what we ordered.

I forgot to take a photo of the sample can for comparison… So you’ll have to take my word for it that it was not ORANGE.

Personally, I think Paul was kind of accusatory when he showed me the stain.  He said things like—THIS IS NOT THE COLOR WE ORDERED.  And I was like, believe me… I see that.

And then he said— So? Can I go ahead?
And I was like, excuse me?  What?  Why are you asking me this?  No.  Obviously.  Furthermore, you know this.

Incase you’re thinking I did something stupid?  Like order floor-stain online, based on nothing but a whim and the color blocks they show you?  That is NOT how I operate.

My advice?  Do not order Cabot sample-cans online and assume they will be the same color as the actual full-size can.  Do not spend a month deliberating over stain.  And ordering stuff on the Internet.  And reading deck chat-boards.  And getting your husband to sand off a good-sized section of porch so that you can test them all.  And then assume that you have made some kind of progress/educated decision/choice you will be happy with.

Because?  If you assume any of those things, you will end up on a Saturday afternoon like me—driving around frantically while your husband morphs into angry-stain-guy.

Paul is like a train. Once it leaves the station?  You DO NOT want to step out in front of it.  Stopping his momentum is likely to end in dismemberment and death.

And that’s where I come in.

My role in this entire house-project is to be the person who leaps out in front of the train.  High-kicking and wearing a marching-band outfit and playing the tuba and tying myself to the tracks.

I’m sure I don’t need to point out—that it is OBVIOUSLY not my fault that the actual stain was significantly different from the sample.  Right?  This is obvious to you.  To anyone, really.  Except to Paul.  To him I was the wrench in his plan.  And therefore the bane of his entire existence.  And?  When that happens?  I think: oh really?  This is the bane of your existence? You have not seen anything yet.

The porch flooring is IPE or Brazilian hardwood… or something I do not really understand.  If you do, good for you, but please do not try to explain it to me because I no longer care.

What I DO care about is that it means your stain options are limited.  So limited that I do not like ANY of them.  It took us a month to find one I liked.  And we had to special order it.  And it ended up being a figment of our imagination.

Of course this was a Saturday afternoon at three o’clock. And of course Home Depot does not carry what we needed.

Like lunatics, we drove over to a small, local paint store.  Thankfully, they were open and they carried a different brand that works for IPE.  We tested all five shades of the Sikkens stain IN the store on a piece of sample deck we brought from home.  We picked the least hideous one and drove home.

Paul had calmed down…lulled into thinking his train was back on track—the offending blockade had been removed and his stain-path was clear.

Paul has the ability to forget.  Immediately.  How he implied I am the genesis of all his project-problems.  And he forgets that he pointed out how I am impossible to please and will deliberate over degrees and shades and tints.  For eternity.

Until the cows come home.  While the rapture occurs and people are yanked from their cars…  I will still be staring at my options and rearranging sample cards and thinking.  And I will say to the returning Christ-figure… oh, you know what?  I’m not quite done here.  So, I’m not going to be able to go.  But thanks for the invite.

When we got home we tested it on the actual porch.  Which apparently is totally different than the sample piece.  Even though the sample used to be attached to the porch?  Now that it is not, has undergone alchemical wizardry, becoming something entirely different.  I hated it.

Plus, now we were forced to test in a super-small area under where the bases for the porch-pillars will come down around the columns.  It’s hard to tell whether you will like your entire front porch the shade you are seeing on only one-square-inch of wood.  Also of note is this—the boards are hugely varied.  Which I actually like a lot.  As long as they’re not various shades of orange.

So we drove BACK to the stain store.  Got another stain.  Tested it in the store.  Drove home.  Tested it on the actual deck.  We both hated it.  Went BACK to the store and got a NEW shade… In retrospect, obviously we should have just bought ALL the stain they had the first time, but we were operating in panic mode, which doesn’t stimulate rational decision-making.

By the time we got home with the final stain, it was no surprise that I didn’t like it.  I didn’t like any of them.  And I couldn’t even tell if any of them were an option that I could actually live with.

At this point, Paul had progressed past irritation into the realm of boiling frustration.  It was Saturday, and Saturday’s program was to finish the porch floor.  With what—he did not care.

I suggested we wait until Monday when I could go to another deck store.  And then Paul lost his mind.  He explained to me at top volume how the porch had JUST been sanded, and was therefore READY. And if we WAITED… ANYTHING could happen:  dirt/dust/bird poop/cat prints/random outdoor catastrophes. And if I had wanted to go to MORE deck stores the time to do it was BEFORE the deck was sanded.

And I was like… YES Paul.  That IS what I want—to spend more of my life driving around to deck stores.  How did you know??

There is something about Paul where he thinks that if he goes crazy first, he gets first dibs on it.  And there will be none left for me.  And I will be forced to take Option B—agreeing with him and slinking away quietly to appease his bad mood.

WHY after EIGHT years of marriage he STILL thinks this is BEYOND me.

Instead, I said—do whatever you want.  And walked away.

And I realized this:  I have come so far.  Even a year ago, I would have been ENRAGED at the suggestion of using a subpar color/product/stain/paint shade/sofa/toilet paper holder.  But now?  I don’t care.

This house has killed my aesthetic martyr.

Random information:  Cabot claims drastic shade difference is impossible.  However, the guys at the mom-and-pop paint store told us that Cabot has been purchased by Valspar and that their store has stopped carrying Cabot because right now the product is unreliable.

Dahlias. Bigger than my head. An Ode to Strangers on the Internet— where I get naked and show you my stats.