After I missed out on the urns/meaning of life… I was CONSUMED by loss.

I have not been so bereft since Mark Markson moved to Florida when I was fourteen. It was MEANT TO BE; and then I never saw him again.

It would seem that all life’s crushing blows come in the same format.

However. It turns out that ALSO, just like life’s crushing blows: if you can look past the fog of disappointment and certainty that you will never recover, you might learn something valuable.

Do you see it? Look past the urns… that’s a campaign bed. 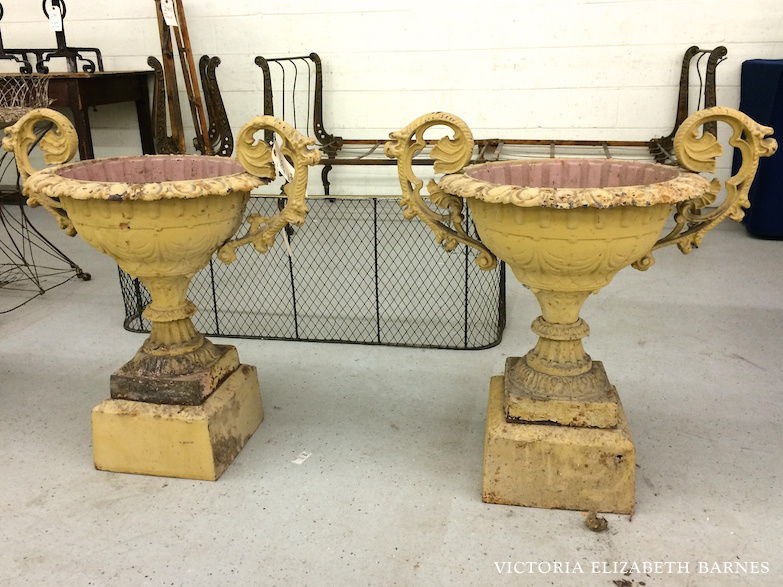 After being on the losing end of mortal combat against silent assailant, I was left frantically covetous for a pair of medium-sized antique garden urns.

In the ensuing months of bitter urn-regret, I kicked up my search-terms on craigslist.

Eventually I found these urns and the urn troll was pacified… They weren’t really big enough. But they resolved the mania; plus I was tired of searching every combination of iron/garden/planter.

Weirdly, I never searched for a campaign bed… why? I don’t know. It’s useless and fancy, so I should have been all over that.

I don’t even remember what this pair sold for at auction, although apparently I liked them enough to take a photo. 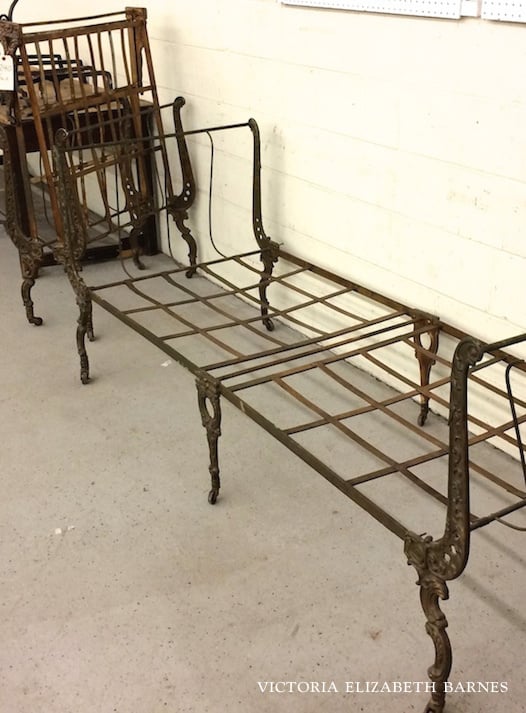 Fast forward to now… I haven’t even been looking on Craigslist. Which is sacrilege and alarming, and the extent of my inertia and cement brain; and also to do with acquisition of Cleveland Bookcase/having everything I ever wanted.

But I got on Craigslist on Saturday, because Paul and I have been talking about buying a large chest freezer for kale armageddon… and I refuse to pay money for something boring and unfancy if I can get it on Craigslist for free.

I’m positive that you understand my strategic financial planning, but it was too sophisticated for Paul, who was saying something about killowats per hour.

I was like, um… no. Let me help you with this simple math:
Crap freezer = oohlala ballgown skirt.
Priorities.

Then he revised his original pitch for improved energy efficiency by pointing out that a free freezer on Craigslist has likely held either Bambi’s murdered mother, or a dismembered human body… possibly both.

At which point I was like— you know what? You are right. Let’s buy a new one… and clicked over to antiques.

I was just absently scrolling when the bed troll was like— HALT. 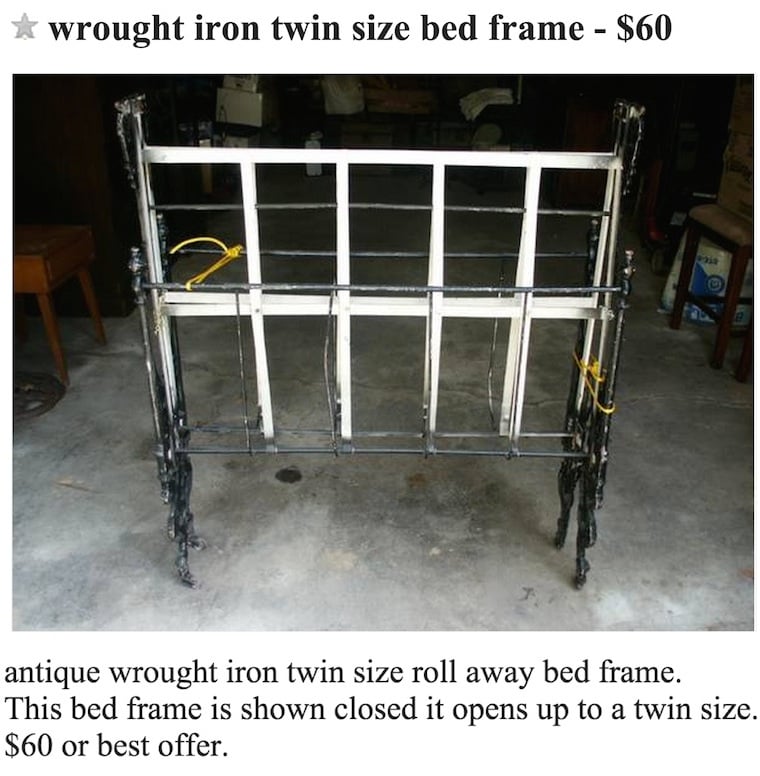 Then I did that thing where you squint at the computer screen. Because logically you know that what you think you are seeing cannot be what you are ACTUALLY seeing because there is only one photo in the listing and it somehow provides no clarity at all. 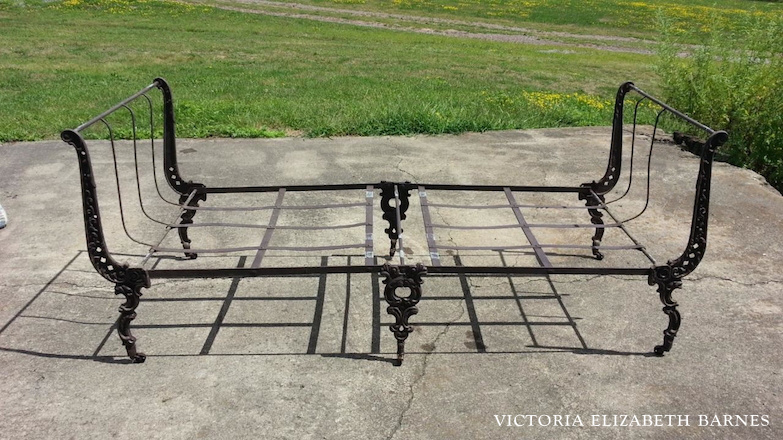 For comparison, here is (the only) one on eBay. (And also a fancy campaign lounge! And a folding chair.)

If you Google “campaign furniture” your results will mostly show you results from the British officer class. Reproductions of British campaign furniture are plentiful… but not really my style.

furniture designed expressly to approximate all the refinement of a proper British household inside the canvas tents of ranking officers afar, but also to break down and fold up fast for easy, compact transport (hence campaign furniture’s other appellation, “knock-down” furniture). — Elegance Under Canvas, 1740-1914 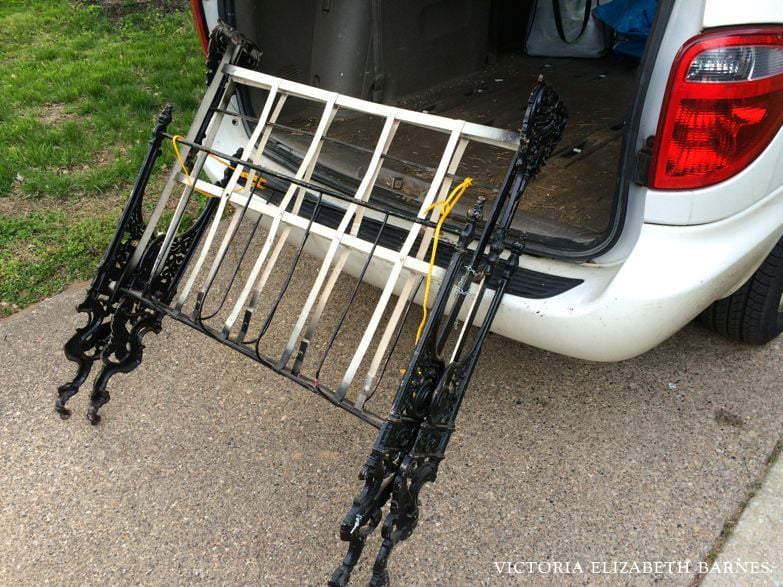 My bed is probably French. It’s iron. And HEAVY. Because I guess the French were like – we COULD make our camp furniture lightweight and portable, OR we could make it giant, fancy, unwieldy, and heavy as hell.

“Mobility was much less a concern than keeping up appearances.” — Elegance Under Canvas, 1740-1914

Which makes perfect sense if you think about it: what better way to defeat an enemy army than to BE FANCIER THAN THEM?

p.s.— Elvis is still here!
I have zero idea of what her plan is.

If you had asked me a year ago – if I thought that the thoughts/love/prayers/whatever you want to call it/of strangers on the internet would impact the lifespan of my most precious animal, I would have given you a very strange look.

But I am completely convinced that the reason she is still hanging out is because of this very thing. So, thank you. xoxo.

Her eating has gone further downhill… but she seems comfortable and still herself. She still enjoys a petting-induced coma, and sitting out on the front porch with us, so I’m just trying to enjoy this time… the in-home vet reminded me this is Elvis’s timeline to complete as she sees fit, and it is outside of my control.

I plan to hire him to advise me on all aspects of life, because he is very wise.

see all my favorite Craigslist scores!

Addition BEFORE and AFTER. Elvis has left the building.